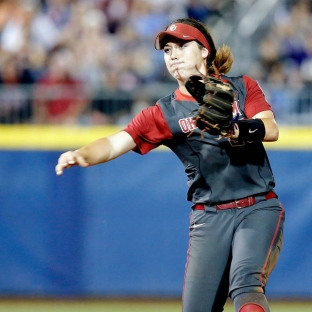 OKLAHOMA CITY, Oklahoma – Once again, Oklahoma used a little ‘Sooner Magic’ to turn a deficit into a win and advance in the NCAA tournament, beating Oregon 4-2 Sunday in the semifinals of the Women’s College World Series.

With the win, the Sooners return to the WCWS Championship Series where they will face top-seed Florida starting Monday night at 6 p.m. CT.

A pitcher’s duel through four innings, the Ducks struck first with a two-run home run from Danica Mercado in the top of the fifth.

Unphased, the Sooners stormed back in the bottom half of the inning. With the Oklahoma faithful chanting “Power of Three” — the motto the Sooners have used for inspiration throughout the postseason — OU rallied for four runs of their own, including a two-RBI single from Shay Knighten and an RBI double from Nicole Pendley.

How did @OU_Softball beat @OregonSB to make the #WCWS championship series? With Shay Knighten’s key hit, that’s how. https://t.co/MNbdWkcJr2

Paige Lowary came on to pitch and shut down the Ducks over the final two innings.

Oklahoma became the first team to not score first and win a game at the 2017 Women’s College World Series.

BOOMER! Reigning national champ @OU_Softball is headed BACK to the #WCWS finals! pic.twitter.com/oyagPAOTKS