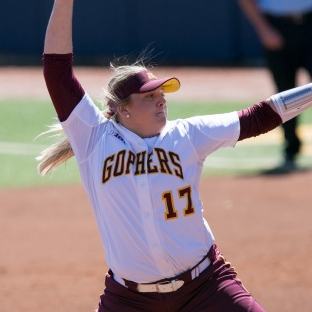 Sara Groenewegen tossed the first-ever no-hitter in the history of the Big Ten tournament as the No. 2 Minnesota Golden Gophers topped the Northwestern Wildcats 5-1 in the quarterfinals Friday afternoon.

Groenewegen is no stranger to big-time B1G tournament performances. She pitched every inning (24) last year for the Gophers as they went on to win the championship. Friday she had a perfect game going into the seventh inning. She finished with 11 strikeouts while only allowing one run. She is now 28-2 on the season with a 0.62 ERA and 267 strikeouts, and she is now just 10 strikeouts away from Sara Moulton’s career strikeout record.

Today @B1Gsoftball Tournament history was made!

It was a gritty game from start to finish for the Maroon and Gold. They took a 1-0 lead after two thanks to good placement on a RBI groundout from Allie Arneson and smart baserunning from Groenewegen.

Groenewegen kept Northwestern off the board with seven straight strikeouts from the first through the third inning. She had help in the fourth when Arneson came up with a beautiful diving grab.

We see you @AllieArneson! Defense stepping up behind G and the #Gophers lead 1-0 heading to the bottom of the 4th. https://t.co/H9FbQUtOEl

It would stay a 1-0 game until the fifth when Erika Rozell provided a much needed spark. Sydney Dwyer placed a single through the left side and Rozell took off from second and rounded third, sliding perfectly around a tag at home for the second run of the day. Dwyer is now just two RBIs away from the Gophers single-season record with 72 this year.

The Gophers offense added insurance in the sixth. Kendyl Lindaman stepped up with the bases loaded and chopped a high single to score two. Maddie Houlihan followed with a gap shot to left to make it a 5-0 game.

.@GopherSoftball‘s @saragroe threw what is believed to be the only no-no in BTT history.

Her story is inspiring: https://t.co/X1gFXTpyGs

The Wildcats put their leadoff batter on in the seventh with a full-count walk. She went to second on a groundout, third on a wild pitch and scored on a sacrifice fly.

The Gophers finished with 10 hits in the victory and had every starter reach base. Houlihan led the way going 3-for-4 and Danielle Parlich went 2-for-3 on the day.

The Gophers have now won 23 straight games and are 52-3 overall on the season.