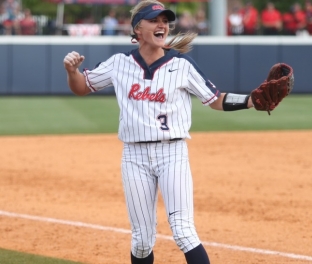 KNOXVILLE, Tenn. — The national championship hopes of every softball team in the Southeastern Conference remain very much alive heading into the NCAA tournament.

All 13 SEC programs earned NCAA berths, a list headed by No. 1 overall seed Florida as it chases its third national title in four seasons.

“It just says a lot for the SEC, and I think it speaks to how the SEC approaches all their sports,” Tennessee co-head coach Karen Weekly said. “The SEC expects to be great in everything they do, and they expect all their institutions to field competitive teams.”

For the first time in history, all SEC teams have qualified for the #NCAASoftball Championship in the same year! pic.twitter.com/of77JQAZ9h

But the sheer size of the SEC makes it an impressive achievement. More than 20 percent of the schools in the 64-team NCAA field are SEC members.

Whether that means the SEC is the nation’s best league this season remains up for debate. This postseason could shape up as a head-to-head battle between the SEC and Pac-12 for conference supremacy.

The SEC has gone just 7-13 this season against the Pac-12, which sent eight of its nine softball-playing members to the NCAA tournament.

“It’s stronger than it’s been in years,” UCLA coach Kelly Inouye-Perez said of the Pac-12’s depth.

Utah coach Amy Hogue says improved pitching has made the difference in the Pac-12.

“That’s what was lacking last year throughout, and it kept some teams out,” Hogue said. “But I think the pitching stepped up [this year]. The hitters remained the same, the defense stayed the same because it’s always been strong. It wasn’t just one kid on a staff. [Whole] staffs got better.”

The No. Overall Seed of the 2017 NCAA Softball Tournament…@GatorsSB!!! pic.twitter.com/FUClxNCn2F

The only exceptions are No. 4 seed Florida State of the Atlantic Coast Conference and No. 10 Oklahoma and No. 15 Baylor of the Big 12. Oklahoma is the defending national champion.

It wasn’t that long ago that the Pac-12 was clearly the nation’s best conference every year. Since the NCAA tournament started in 1982, the Pac-12 has won 23 national titles while the SEC has just three. But all three of the SEC’s titles have come in the last five years, while the Pac-12 hasn’t won a championship since Arizona State’s 2011 title.

The SEC started closing the gap by pouring more resources into softball.

Kentucky, Missouri and South Carolina have all opened new stadiums within the last five years. Texas A&M is opening its own $28.6 million complex next year. The launching of SEC Network has brought in more money plus increased visibility, as the station aired 50-plus games this year.

The opportunity to play in new stadiums and appear on television has helped SEC schools attract plenty of players from the West Coast, which continues to produce the best softball talent.

Eight #Pac12SB teams are headed to the NCAA Tournament including five in the Top-16, full release: https://t.co/FLvJ8HCUWd pic.twitter.com/4lUpmgnRn2

There are 50 SEC players from California. No other state has produced that many current SEC players. By contrast, the Pac-12 has only 10 players from high schools in states with SEC programs.

The SEC is a 14-school conference with 13 softball programs because Vanderbilt doesn’t play softball. Colorado, Southern California and Washington State are Pac-12 schools without softball programs.