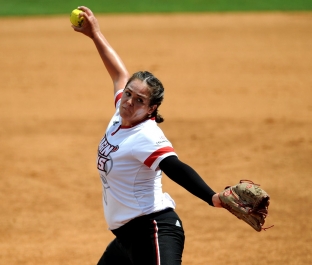 BATON ROUGE – Alex Stewart pitched the third NCAA postseason no-hitter in Louisiana softball history in a 6-0 win over McNeese on Friday at Tiger Park in the opening round of the NCAA Baton Rouge Regional.

Stewart (26-3, 1.57 ERA), who pitched shutout softball for the seventh time in her past eight starts, retired the Cowgirls in order four times and struck out six in collecting her first career no-hitter. She joins Cheryl Longeway (1995 vs. Michigan at WCWS) and Brooke Mitchell (2003 vs. San Diego State at Cal State Fullerton Regional) in program history for achieving the feat in the NCAA tournament.

The Ragin’ Cajuns outfielders made three critical catches to help Stewart secure the no-hitter. Aleah Craighton robbed Morgan Catron of a would-be home run in the second inning, then in the sixth inning Kelli Martinez and Haley Hayden made diving catches on shallow fly balls.

ALEAH CRAIGHTON goes up and gets it! OFFICIAL ROBBERY by the @RaginCajunsSB outfielder! #SCTop10 pic.twitter.com/LrZzLykVZS

“That no-hitter is a credit to my teammates,” Stewart said postgame reflecting on the performance. “They took away hits with fantastic Top 10 plays. I just can’t say enough about my defense.”

It was a scoreless, hitless affair between the Ragin’ Cajuns and Cowgirls through the first 3-1/2 innings of play. Craighton recorded the game’s first hit with a single to lead off the bottom of the 4th and the tie was broken three batters later when Corin Voinchè doubled down the left field line for a 2-0 lead.

“First round games are always a war,” Louisiana coach Michael Lotief said. “I’m proud of my kids and proud of the way they competed. Alex battled, gutted it out and her teammates played well behind her.

NO-NO! Alex Stewart tosses a gem for @RaginCajunsSB for the first no-hitter of her career and ULL’s first postseason no-hitter since 2003! pic.twitter.com/94eqh9tseM

Louisiana created breathing room for Stewart in the fifth inning. Hayden singled into right field where the ball was misplayed, the Cowgirls second error of the frame, allowing Kara Gremillion (fielder’s choice) and DJ Sanders (fielding error) to cross home plate and extend the lead to 4-0.

Hayden later scored in the fifth on a Lexie Comeaux ground out and Martinez scored on a wild pitch in the sixth inning to complete the scoring.

Stewart worked around a leadoff hit by pitch and two-out walk in the seventh to preserve the shutout and etch her name in the Ragin’ Cajuns history book.