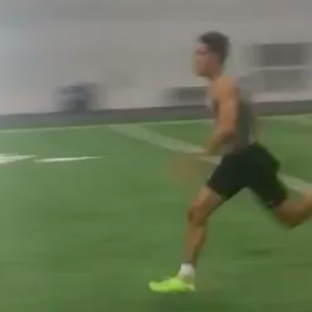 What’s in the water on Washington’s campus?

Then, on Wednesday, Washington soccer player Justin Fiddes gave the 40-yard dash a shot after practice. Why not, right?

It turns out, though he’s no Ross, Fiddes sure isn’t a slouch:

Justin Fiddes with the fastest 40 of the year! pic.twitter.com/NaHU8uSjHu

A 4.37! That’s starting wide receiver speed. And if you listen to the end of the video, someone behind the camera says this time is the same as the last one he ran. So this wasn’t a one-hit wonder: Fiddes is just plain fast.

RELATED: Breaking down the preseason poll

For a little perspective on just how fast Fiddes ran this 40-yard dash, only five players ran faster at the entire NFL Combine this spring:

Fiddes also tied running back T.J. Logan, who played at North Carolina and is now on the Arizona Cardinals’ roster, at 4.37.

All that speed probably comes in handy for Fiddes, a senior defender from San Diego who lines up primarily at left back. He’s played over 3,000 minutes with the Huskies in three years, which means he’s been running around plenty since he arrived in Seattle. Maybe that’s why he’s so fast? Or maybe it’s the Pacific Northwest air.

Whatever the case may be, good luck getting past Washington’s back line this season, Pac-12. Fiddes is coming for you.