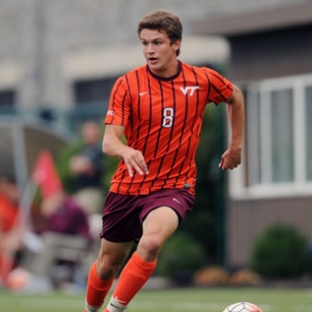 The No. 17 Virginia Tech men’s soccer team defeated the No. 14 Creighton Bluejays 2-0 in Omaha Friday night. Headed goals from Collin Verfurth and James Kasak were the difference as the Hokies handed Creighton its first home loss on opening night since 1995.

“I’m pleased with the result tonight,” said Mike Brizendine. “I think at times we were able to connect and get forward to cause Creighton some issues.”

Tech went in front in the 32nd minute through Verfurth’s powerful header. Rory Slevin served a chipped ball into the back post from a free kick 30 yards out and Verfurth rose to meet it ahead of the challenge of Creighton goalkeeper Michael Kluver.

“Our backline and Ben (Lundgaard) did an excellent job in keeping them off the board all night,” said Brizendine. “They are a talented team so I’m pleased with the performance of those guys.”

The defensive unit of Jakob Bluemler, Verfurth, Jon Ingason and Tamburini cleared their lines all evening as the Jays applied constant pressure in the final third. Creighton earned 11 corner kicks throughout the match, each being successfully swept away. In goal, Lundgaard came up with eight saves to earn the shutout.

Ricky Lopez-Espin, a 2017 MAC Hermann Award Watch List member alongside Marcelo Acuna, carved out six shots for the Bluejays, only managing one on target, which was dealt with by Lundgaard. Joel Rydstrand and Akeem Ward each tested the net, with three and two shots respectively.

The Hokies doubled their advantage in the 85th minute when they caught the Bluejays on the counter. Elias Tamburini cut onto his right foot and played a cross to the far post where Acuna let the ball drift over his head as James Kasak arrived to redirect his header past the goalkeeper.

Tech was clinical in taking their chances, producing seven shots. Verfurth had two, Justus Kauppinen had an early effort saved and Kasak’s goal accounted for all four shots on target.

This is the second straight season the Hokies have started the season with a road victory against a ranked opponent.

Tech helped the ACC to an 11-1 record on opening night.

The Hokies take on the Nebraska-Omaha Mavericks at 7 p.m. EST on Sunday, August 27. It will be the programs’ first meeting on the soccer field.