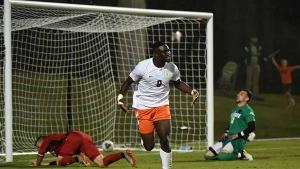 
For the third time in as many weeks, a new team sits atop the United Soccer Coaches poll — Virginia. The Cavaliers leaped Stanford for the No. 1 ranking after a win over Notre Dame.

Virginia leads both the men’s and women’s soccer polls.

Despite rallying from deficits of 2-0 and 3-2 to escape UC Santa Barbara with a draw, the Cardinal were unable to retain their place at No. 1, adding to the pandemonium of four of last week’s top six teams losing for the first time.

Georgetown, formerly ranked second, was minutes away from a scoreless draw before Louisville’s Kino Ryosuke shattered the Hoyas’ perfect record with a game-clinching header 106 minutes in.

Clemson passed Wake Forest in the rankings last week after the Demon Deacons’ first loss. When the two went head-to-head, Wake Forest bested the No. 4 Tigers on a penalty kick in overtime.

Indiana twice flirted with danger, securing ties against Seattle and Notre Dame. Against in-state foe Butler, the Bulldogs kept the fifth-ranked Hoosiers at bay with a 2-1 win to secure an upset.

The most recent top-10 program to enter the loss column is Saint Mary’s. The Gaels led UC Davis 2-1 before the Aggies knocked in three goals over the final 20 minutes. Not only does this defeat mark the first blemish on the Gaels’ record, but it also stands as the program’s first regular season loss since 2017.

Following the mass shakeup, here’s a look at the newest poll.

Although four of the top six teams lost, each remained inside the top 10. However, Wake Forest, SMU and Washington each progressed closer to the top of the poll. The Demon Deacons move to No. 3 while the Mustangs and Huskies file in at No. 4 and No. 7.

SMU and Washington started the season unranked. Both are among the top 7 teams currently and upcoming matches for each provide an opportunity to move up even further. We will get into more detail on both of those later.

The Midshipmen, along with SMU, Virginia and Missouri State are the four ranked teams with perfect records.

Additionally, three teams joined the rankings this week — Duke, West Virginia and San Diego. The Blue Devils and Mountaineers have each spent at least one week in the poll while the Toreros make their first appearance of 2019.

Duke enters at No. 18, the highest of the three, following a rivalry win over North Carolina. West Virginia re-enters the rankings at No. 23 and San Diego comes in at No. 25.

Virginia moved to No. 1 in the poll ahead of Friday’s match with Louisville. The Cardinals have been a bit unpredictable but against the top 25, they’re lethal. Louisville owns three wins over ranked opponents, including two top-10 foes with a chance at another in Charlottesville.

Stanford managed to avoid defeat last week, staring down a two-goal deficit at UC Santa Barbara before rallying for a 3-3 draw. To remain unbeaten, the No. 2 Cardinal will have to get through No. 7 Washington in the season’s first head-to-head matchup between ranked Pac-12 teams. Neither the Cardinal nor Huskies have a conference loss, making Thursday’s match about far more than bragging rights.

Though it may only be early October, Sunday’s top-15 matchup between Southern Methodist and Central Florida could establish the top seed in the American Athletic Conference. The determining factor is whether or not Cal Jennings and the Knights can take advantage of a stifling SMU defense. The Mustangs are outscoring opponents 28-3 through eight matches.

James Madison has seven consecutive wins after an 0-2 start and is playing some its best soccer of late. But a non-conference match with unbeaten Cal State Fullerton should be a good test for both teams. The No. 14 Titans have yet to allow more than two goals in a match, a mark the No. 16 Dukes have hit five times alone during their winning streak. Wednesday’s match in Harrisonburg will be a battle of wills.