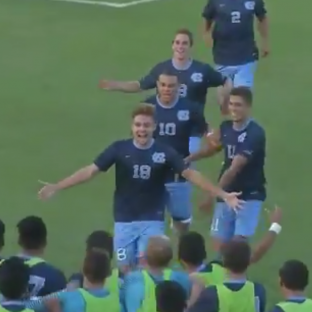 BROWNS SUMMIT, North Carolina – Mauricio Pineda scored the game-winning goal late in the first half to lift No. 8 North Carolina to a 2-1 victory over 23rd-ranked Duke in the 89th edition of the Tobacco Road rivalry from Macpherson Stadium.

Alan Winn continued his torrid scoring trend of late with his fourth goal in four games. Cam Lindley delivered another perfect cross that Winn headed home in the eighth minute for the Tar Heels.

Carolina went 32 minutes between shots as Duke controled the run of play for a large chunk of the first half. The Blue Devils finally got the equalizer in the 32nd minute on a goal from Daniele Proch, his third of the campaign.

Down go the Devils! Check out the highlights from tonight’s win over Duke pic.twitter.com/0KKzltLABF

However, the Tar Heels made the most of its chances in the opening frame. After scoring at the 7:21 mark by Winn, the next shot by Carolina also hit the back of the net. This time it was Pineda registering his first of the season at the 39:54 mark.

Lindley’s corner was true again, first connecting with the head of Jelani Pieters that pushed the ball to Pineda for the go-ahead goal just before halftime.

The second assist for Lindley was his seventh of the season, giving him the ACC lead.

Alec Smir made a single save to garner the win for the sophomore keeper from nearby Greensboro.

The one-goal margin marks the 20th game in a row in the series that has been either a draw or decided by a single goal. The Tar Heels have won three straight over the Blue Devils by identical 2-1 scores.