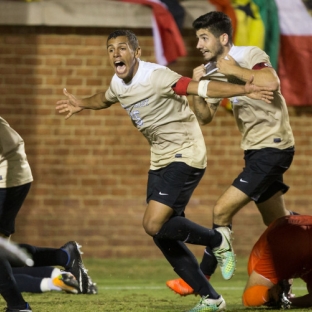 The teams traded goals in the first half and again in the second half before Steven Echevarria won it for the Demon Deacons (10-1-0, 4-0-0 ACC) in the 103rd minute.

DEACS WIN! DEACS WIN! ECHEVARRIA PUTS IT AWAY IN THE SECOND OVERTIME! No. 2 Wake Forest 3, No. 6 Clemson 2! pic.twitter.com/3U5aPtpGGa

A throw-in by Logan Gdula was one-touched by Jon Bakero into the middle of the box, where Echevarria beat the keeper inside the right post for the game-winner. The assist was Bakero’s NCAA-leading 11th of the season.

Both the Deacons and the Tigers (8-2-0, 2-2-0 ACC) had a student-athlete record a brace, as Wake Forest’s Ema Twumasi and Clemson’s Robbie Robinson traded goals.

Twumasi put the Deacs on the board in the sixth minute, finishing a fast break off a quick pass from Luis Argudo to make the score 1-0.

In the 35th minute, Robbie Robinson knocked in a free kick from Diego Campos to tie the game at 1-1 heading into the break.

Twumasi retook the lead for Wake Forest in the 59th minute, weaving through the center of the defense before roping a shot from 30 yards out to beat the keeper and make the score 2-1.

Robinson scored on another Campos free kick in the 89th minute, heading it in for the late equalizer to set up the overtime dramatics.

Echevarria’s game-winner and Twumasi’s brace help the No. 2 Deacs outlast No. 6 Clemson.

Freshman Andrew Pannenberg made his debut in goal and recorded three saves to pick up the victory.

The game was fairly even throughout, with the Tigers holding a slight 10-9 advantage in shots and corners even at 3-3.

The attendance total of 4,781 was the fourth-highest in program history, and biggest since 2015.

Wake Forest returns to action on Friday against another top-10 foe in North Carolina. The game will be played at Cary’s WakeMed Soccer Park due to construction in Chapel Hill.