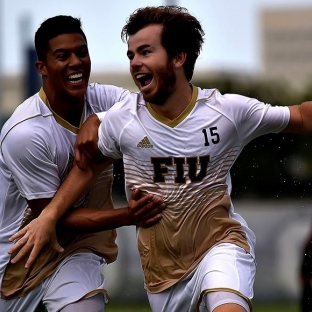 The FIU men’s soccer team began a tough three-match road stretch on Tuesday night as it traveled across Alligator Alley to face Florida Gulf Coast in Fort Myers. In retrospect, it may have been easier for the Panthers to pull over and wrestle alligators than it was to face the Eagles.

The Panthers, who came into the match ranked No. 14 in the latest United Soccer Coaches Top 25 poll – and as one of three unbeaten teams in Division I college soccer – pulled out a thrilling 4-3 double-overtime come-from-behind win over FGCU. FIU stunned Florida Gulf Coast with the equalizer on a header by Marvin Hezel in the 90th-minute (25 seconds left) and the game-winner by Alessandro Campoy in the 110th-minute (eight seconds left) to secure the win. The Panthers improve to 7-0-3 on the year and FGCU drops to 6-4-1.

FGCU came out of the gate quickly to take a 1-0 lead when Nicolas Samayoa beat FIU goalkeeper Hugo Fauroux, off a set piece from Chris Clement and Miguel Jaime in the 13th minute.

The Eagles then struck again eight minutes later when Jaime took a pass from Shak Adams and found the back of the net in the 13th minute to make the score 2-0.

Paul Marie didn’t waste any time getting the Panthers on the board after the Eagles’ second goal of the game. Marie was served up by the nation’s leading scorer, Santiago Patino and then buried a shot from 10 yards out inside the left post.

With all of the scoring in the first half coming in the first 16 minutes of play, the Panthers went into the locker room at the intermission trailing for the first time all season, 2-1. Despite the fast start by FGCU, the match was even at the break with the Eagles holding a 9-8 shots advantage, with shots on goal even at five apiece.

In the second half, Adams gave the Eagles a 3-1 lead in the 58th minute, chipping the ball over Fauroux.

The Panthers did not go away, as Alvaro Alvarez came off the bench and took a pass from Inigo Sagarduy to beat Connor Gavigan and make it a one-goal match, 3-2 in the 77th minute.

After a red card was issued to FIU’s Mohamed Conde in the 85th minute, and the Panthers having to play a man down the rest of the way, the blue and gold kept it close enough to give themselves a chance in the final seconds when Hezel, a graduate student, sent his header past Gavigan to even the game up at three-all.

FIU only had four of the 10 total shots in the two extra sessions; however, none was bigger than Campoy’s with eight seconds left when he took a pass from Sagarduy and sent a left-footed shot past a charging Gavigan for the winner, which unleashed a frantic dog-pile on the field.

FIU finished the game with 18 shots on the night, while FGCU fired off 22.

Fauroux would finish the match with five saves in the win.

FIU would have 20 players play in the contest with 13 of the 20 playing better than 46 minutes.