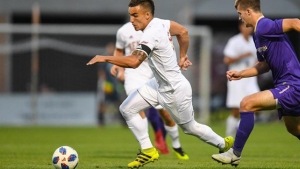 DENVER – Senior striker Andre Shinyashiki finished his fourth goal of the early season in the side netting in the 103rd minute to send the [19/5] University of Denver men’s soccer team past [3/18] Washington 3-2 in extra time on Thursday night at the University of Denver Soccer Stadium.

Senior transfer Moshe Perez scored the equalizer to pull the Pioneers level at 2-2 in the 77thminute, and played the thru ball behind the Washington back-four that led to the Shinyashiki winner.

The Pioneers (2-0-0) got on the board first in the sixth minute when a dangerous Perez free kick from the right flank to the top of the six-yard box was deflected in off Washington (2-1-0) defender Ethan Bartlow. Denver took the 1-0 lead into the locker room.

RELATED: The 9 best places to watch college soccer, according to the fans

Washington quickly equalized on the other side of the intermission when Joey Parish got free on the back post on a set-piece and hammered home an open header. The Huskies flipped the script and took the lead in the 63rd minute when Dylan Teves netted his first of the season on an assist from Kasey French. Teves’ shot deflected off a Denver defender in-front and carried over the out-stretched arms of the Denver keeper.

Redshirt-junior defender Shae Smalley re-entered the game as a second half substitute in the 76thminute, and 10 seconds later setup the Perez equalizer with a back-post corner kick to bring the Pioneers back to level terms at 2-2.

Sophomore midfielder Jacob Stensson and Perez combined in the midfield to setup the Shinyashiki game-winner. Perez played a well-paced ball in behind the Huskies’ backline to the darting rung of senior Kenny Akamatsu. The Denver winger pulled the ball back to Shinyashiki at the top of the box, who placed it in the bottom right corner for the third extra time winner of his career (vs. New Mexico 10/19/16, vs. Portland 11/3/16).

MORE: NC State defeats No. 4 Akron on the road

UP NEXT:
The Pioneers will hit the road for the only time in the first seven matches of the 2018 season on Monday as Denver takes on SMU. Kickoff is set for 6 p.m. MT.