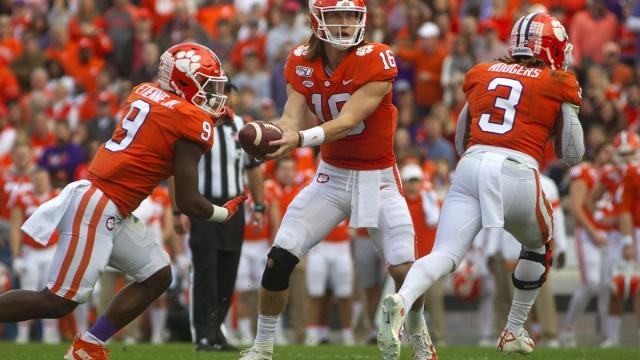 But the Tigers aren’t that far out ahead from every other team. Here’s a look at the longest active home winning streaks going into the 2020 college football season:

As shocking as this loss was, it didn’t ruin Clemson’s title hopes. The Tigers wouldn’t lose again in winning the national title that season. Clemson also picked up another crown in 2018 and played for the title again this past season. Since falling to Pitt, the Tigers have rarely been threatened at home. Clemson rallied to beat Syracuse by 4 in 2018, but the Tigers have won by an average of 33.3 points during their 22-game streak.

The Knights haven’t lost at Bright House Networks Stadium since Nov. 19, 2016, 35-20 to Tulsa. UCF then lost at South Florida and in the Cure Bowl (played in Orlando, but at Camping World Stadium) to end the 2016 season. However, UCF has gone 35-4 the last three seasons, never losing at home. The Knights have also finished the season ranked three years in a row.

Ohio State’s last defeat came because of Baker Mayfield early in the 2017 season. OSU has often won in routs since then, helping the Buckeyes win three consecutive Big Ten Championships. This past season, Ohio State beat four teams in Columbus that ended with double-digit wins: Florida Atlantic (by 24), Cincinnati (by 42), Wisconsin (by 31) and Penn State (by 11).

CHAMPIONS: Every national champion, through the years

That’s right. Though UAB has an 18-game home winning streak, the Blazers haven’t lost at home since 2014. That’s because UAB eliminated its program for two seasons before coming back in 2016.

UAB has yet to lose at Legion Field since returning. Coach Bill Clark has led the Blazers to a 28-13 record since coming back.

After a 4-8 struggle in 2016, Brian Kelly and Notre Dame have mostly been piling up wins. The Irish beat Temple in the 2017 home (and season) opener before losing to Georgia in their second game. But Notre Dame has since won 18 in a row in South Bend, Indiana. Those wins have meant the Irish have put together 10, 12 and 11 win seasons in a row, including a College Football Playoff appearance in 2018.