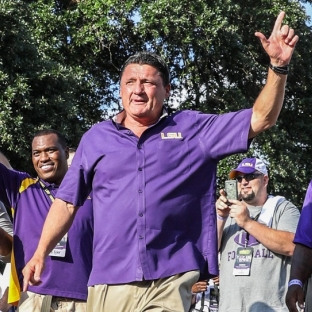 College football: Which new FBS head coaches are most likely to succeed?

Grading the hires of new college football coaches is an offseason tradition and an exercise in educated guess work.

Still, college football writers do it every year, ticking off fans of teams that receive poor marks and opening themselves up for criticism years later when that C turns out to be an A. Or vice versa.

So let’s not do that. Instead, let’s rank the members of the 2016-17 class of newly hired coaches by which are most likely to succeed in their jobs.

Success is relative, of course. At Texas, triumph is a steady diet of conference titles and national championship contention. At Purdue, regularly going to bowl games is enough. At LSU, it’s beating Alabama.

With that, here we go:

Brohm is most likely to thrive because of the combination of his track record (30-10 in three seasons at Western Kentucky) and the low bar to clear at Purdue, where the past nine seasons have produced two bowl appearances and one winning final record. The Boilermakers shouldn’t be this bad and the school is in the process of pumping millions of dollars into facilities. Brohm is a creative offensive mind who could easily be Purdue’s next Joe Tiller.

Playing in the Big Ten West doesn’t put the Gophers at a severe competition disadvantage the way that, say, Maryland is by being in the Big Ten East. At Western Michigan, Fleck had recruiting classes that were comparable to some low-rated Big Ten groups, which is remarkable for a MAC school. If the Gophers can consistently threaten Wisconsin, Nebraska and Iowa under Fleck, that’s a step forward, and it doesn’t seem like a stretch for him to pull that off a few times over the next five years.

Strong did an excellent job at Louisville in the Big East, when he was able to load up on players from Florida. Now he’s back in his comfort zone. In the short term, Strong inherits a team favored to win the American Athletic Conference.

It is easy to buy into the Herman hype-machine. He very well could be the next great college football coach, and Texas offers him the chance to compete at the highest level. He has also been a head coach for all of two seasons at a Houston program that went 75-43 in the nine years before he got there. Meeting through-the-roof expectations at Texas means Herman’s success is no guarantee.

All first-time head coaches come with uncertainty, even one like Sanford who seems to have all the makings of a rising star. This looks like an ideal match of ascending coach and program, but beware: Anything less than yearly Conference USA championship contention will be seen as a step back for WKU.

Successful stints as interim head coach at Southern California and LSU have helped Orgeron put a 10-25, three-year run at Ole Miss behind him. He seems better prepared to lead a major program, but he is also replacing the winningest coach in LSU history. Good luck satisfying Tigers fans while Nick Saban is still coaching in Tuscaloosa.

Can Oregon replicate the peak it reached under Chip Kelly? How close does Taggart — who needed 2 1/2 seasons to turnaround USF — have to come to Kelly to be considered successful?

Rhule has hit all the right notes responding to Baylor’s off-field issues. Winning in Waco, Texas, will be more challenging. Especially if fans expect him to match Art Briles’ record.

For all Kiffin’s issues at Tennessee and USC, his teams went 35-21. The former Alabama offensive coordinator might not be around Boca Raton for long, but there’s a good chance he’ll leave them with a few bowl appearances.

Following Herman is not an enviable task, especially for a first-time head coach.

The last three Temple coaches — Al Golden, Steve Adazzio and Rhule — left for better jobs. So, yes, you can win at Temple. But it isn’t easy and the AAC East competition is improving.

UConn needed a coach who can consistently get the Huskies to bowl games, and Edsall has done it before.

Talking the #iufb Defense with Jon Gruden and @CoachAllenIU.

If Allen produces just slightly better results than Kevin Wilson without alienating the administration, he will be a success. Problem is getting better results while facing Ohio State, Michigan, Penn State and Michigan State every year.

The 65-year-old Davis brings credibility to a program with just two winning seasons in 12 years.

Lester is a former star quarterback at WMU, which will buy him good will. He doesn’t have to match Fleck, just keep the Broncos relevant in the MAC.

Cal might be the toughest job in the Pac-12 right now and Wilcox has never been a head coach.

Solidifying the line of scrimmage with a huge pickup today. Trust the process and see the change! #bethechange #georgiastatefootball

Elliott is stepping into the job at the right time, with the Panthers set to move into a new stadium.

The Spartans have had three winning seasons since 1993. Brennan, 44, is a first-time head coach. Maybe it works out, but the odds are against him.

Fresno State is a shadow of the program that once routinely knocked off power teams. And Tedford hasn’t been a head coach since he was fired by Cal in 2012.

The Colin Kaepernick years created a false sense of what reasonable expectations should be at a program that ranks near the bottom of the Mountain West in athletic revenue. Norvell is a career assistant getting his first shot as a head coach at age 55.