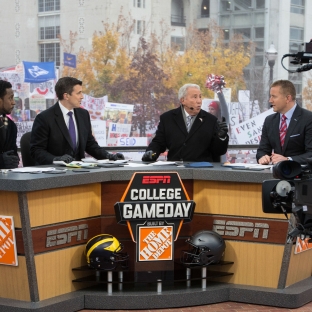 College football: Where is ESPN College GameDay this week?

It’s a question that every die-hard college football fan asks on a weekly basis: Where is College GameDay this week? We’re here to help you find the answer each week.

ESPN announced Saturday night that College GameDay will be in State College for No. 19 Michigan at No. 2 Penn State. The Nittany Lions are one of two undefeated teams remaining in the Big Ten, with Wisconsin being the other, and they’ll host a Wolverines team that survived an overtime scare in Week 7 at Indiana, 27-20.

These are two of the stingiest defenses in the conference, if not the country. Penn State has allowed just 54 points this season (nine per game), while Michigan has allowed 88 (14.7 per game). The Nittany Lions have a Heisman hopeful in running back Saquon Barkley.

We’re headed to State College next for @UMichFootball vs. @PennStateFball! pic.twitter.com/R4cGcuzwnk

Where has ESPN College GameDay been this season?