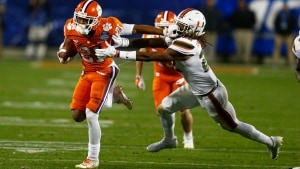 College football: When is the ACC Championship Game?


The ACC is one of two conferences, along with the SEC, that has been represented in the College Football Playoff every year. Florida State earned the No. 3 seed in the inaugural year of the playoff and Clemson has made the CFP in each of the last three seasons, most recently after a 38-3 win over Miami in the 2017 ACC Championship Game.

Both teams entered the conference championship game with just one loss, meaning the winner was likely to advance to the playoff regardless of the outcome.

Clemson and Miami, which were ranked No. 2 and No. 8 in the preseason AP Top 25 poll, respectively, could very well meet again in the ACC Championship this season. Or will Florida State and Virginia Tech challenge the Tigers and Hurricanes in the Atlantic and Coastal divisions, respectively?

The 2018 ACC Championship Game is on December 1, 2018, at Bank of America Stadium in Charlotte.