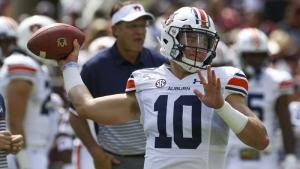 
We’re into October as we hit Week 6 of the 2019 college football season. Auburn vs. Florida is just one of the games to check out. Below, find our Week 6 preview of the top games, what to watch for and the rankings.

Expect this week’s games to add more drastic changes in the polls.

After losing to Pitt in Week 4, UCF is back in the Top 20 going into this tough AAC game. UCF beat Cincinnati by 25 last year, but this is still a Bearcats program that won 11 games in 2018 to finish ranked and is 3-1 this season. The Knights’ offense has been potent this season, but Cincinnati and coach Luke Fickell have a tough defense and what should be a great home atmosphere for this one.

LSU fell from No. 4 to No. 5 as teams try to position themselves each week by posting dominant wins. LSU was off last week and now gets a visit from a strong and possibly dangerous Utah State team. Even if Jordan Love and the Aggies put points on the board, Heisman hopeful Joe Burrow and the Tigers should have no trouble to breeze by.

Iowa has won five of the last six, including the 2016 stunner when Keith Duncan kicked a 33-yard field goal to upset then-No. 2 Michigan on the final play of the game. The Hawkeyes are the higher ranked team this time, as the Wolverines try to prove the early season struggles are in the past.

Two of the country’s best rushing attacks will be battling here. Army is tied with Oklahoma for fourth (293.5 yards per game) and Tulane is No. 9 (273.3). The Green Wave also has designs on competing for a conference title, as the rally against Houston improved Tulane to 3-1 overall.

The biggest game of the week sees two undefeated teams face off. Though both are ranked in the top 10, neither one is the favorite in its own division: Florida is behind Georgia and Auburn is behind top-ranked Alabama and also LSU. Auburn already has a neutral site win against ranked Oregon and a road win at ranked Texas A&M. If Auburn adds another road win against a ranked foe this week, expect to hear more calls that the Tigers should be No. 1.

West Virginia beat FCS James Madison by only 7 and then lost to Missouri by 31 to begin the season. The Mountaineers have since regrouped a bit with wins against NC State and Kansas. Still, beating Texas would be a statement that this might not be the full rebuilding season many expected under first-year coach Neal Brown. Will Grier’s touchdown and 2-point conversion gave WVU the 42-41 win last year in Austin. Texas QB Sam Ehlinger will be ready as the Longhorns have one more game before facing rival Oklahoma in Dallas.

Baylor is one of four undefeated teams to not be ranked in the AP Poll (Memphis is No. 23 in the Coaches Poll). Now the Bears leave Texas for the first time this season to play a K-State team that is coming off its first loss of the season. A win in Manhattan would mean Baylor should be taken seriously as a Big 12 title contender.

Army has won the Commander-in-Chief’s Trophy the last two seasons by beating both Air Force and Navy in each of the last two years. Now the Falcons and Midshipmen hope this game is a springboard to ending that little Army run. Through four games, 3-1 Air Force looks like a possible Top 25 team down the road (only loss to now No. 16 Boise State by 11 on the Blue Turf).

One week after a blowout win on ABC at night on the road, Ohio State gets another opportunity — only this time it’s at home. After a five-year stretch where the Spartans went 3-2 against the Buckeyes, Ohio State has rattled off three in a row, with the highlight the 48-3 win in 2017 that was the biggest loss of Mark Dantonio’s MSU career.

Cal starting QB Chase Garbers is out indefinitely, which makes the Golden Bears’ mountain to climb that much steeper. Cal was No. 15 just one week ago, but a loss to Arizona State dropped the Golden Bears from the undefeated list and from the polls. That also left the Pac-12 without any unbeaten teams. Oregon has done well since falling to Auburn in Week 1. Defensively, the Ducks have allowed only 15 points during its three-game winning streak.

College football Week 6 preview: What to watch out for, big questions

Will we continue to see volatile top-5 changes?

Don’t be surprised if voters continue to be open to making big changes. Going into last week, Clemson had 55 of 62 first-place votes in the AP Poll and 62 of 65 in the Coaches Poll. But a 1-point win at North Carolina was enough for the defending national champions to drop to second. And Ohio State used a 41-point drubbing of Nebraska to jump idle LSU for fourth in the AP.

Clemson is the first AP No. 1 to win and still drop from the top spot since 2015 Ohio State, which fell to second after a 28-14 win against Minnesota.

Five teams have No. 1 votes in the AP Poll this week, too:

Will this spreading out continue, or will consensus set in? Well, as more teams lose, that should lessen the pool of No. 1 contenders. But Auburn has a chance to add more to its pile, especially if the Tigers win huge at the Swamp against No. 10 Florida. No. 4 Ohio State could add more again if the Buckeyes take advantage of another primetime ABC slot and beat No. 25 Michigan State.

All that said about undefeated teams, that doesn’t mean they should take up all the oxygen. In five years of the College Football Playoff, 14 of the 20 teams have had one loss. Last year’s three undefeated teams appears to be an outlier (…unless it’s actually the start of a new trend. We’ll see.).

So which one-loss teams are in the best position to crash the CFP field? Though Notre Dame is the highest-ranked one-loss team, the Irish will play only 12 games because it’s an independent — crucially missing a 13th data point in the week leading up to the official CFP field announcement.

Texas should feel confident about its chances, as the Longhorns are No. 11 and could play Oklahoma twice (just like last year). A win against the Sooners would probably move Texas close to the top 5.

But the most intriguing conference is likely the Pac-12. Like the Big Ten, the Pac-12 has missed the CFP in each of the last two years. On the surface level, it would be easy to write off the conference, as there are no more undefeated teams. But there are seven one-loss teams, with four of them ranked. Unless there’s an unusual number of undefeated teams, the Pac-12 might be in good shape — as long as its champ has only one loss. Washington had three last year and then lost in the Rose Bowl.