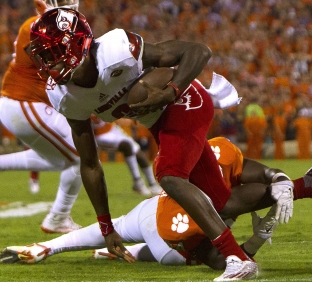 College football Week 3 score predictions: What to watch on Saturday

Another week down, another fun college football weekend ahead.

Here are some key questions that will help determine who Week 3’s winners will be:

*Can Lamar Jackson crack what might be the nation’s best defense? (Clemson at Louisville, 8 p.m. ET, ABC)

It’s one thing to do a little damage against Clemson’s filthy defense. But before you can think about actually scoring points against the Tigers, you need to make sure that D doesn’t inflict damage on you.

The Tiger defense – particularly the front seven – had a lot of hype coming into the season. Considering how many key guys they returned from a championship-caliber unit, it made sense. Through two games, they’ve somehow managed to exceed expectations.

You get the idea. These guys are dominant.

But so is Louisville quarterback Lamar Jackson, the most dynamic — if the not the best — player in the country. Question: What’s more absurd, the reigning Heisman winner’s stats through two games (1,010 yards of total offense, eight touchdowns) or the way in which he piled up those marks? Jackson is equal parts substance and style. That’s rare.

From a pure offense vs. defense standpoint, this might be the best matchup of the season. Fortunately for Clemson, it’s won in even bigger spots for even higher stakes. Even on the road.

To put it bluntly: Texas couldn’t stop the Maryland offense, so it probably won’t be able to stop Sam Darnold, Ronald Jones and the Trojans.

That said, most defenses struggle with the USC offense. What’s the best way to combat that? By running the ball, which the Longhorns should be able to do. Through two games, rushing defense has been the Trojans’ weakness. Their woes against Western Michigan in Week 1 were well documented, and despite an impressive win over Stanford, the Cardinal still ran for 170 yards on them. Bryce Love averaged almost 10 yards per carry.

Texas has a stud in the backfield, too: 6-foot-4, 250-pound Chris Warren, III. Warren is impressively nimble for a big fella, scampering for 166 yards and two scores last week. The Longhorns occasionally struggle with pass protection, but they get good push off the line of scrimmage.  USC’s secondary is good, but we can’t say the same about its front seven. At least not yet.

If Texas can keep it close, keep its offense on the field, Warren can rush for 200 yards. Move the chains, keep the score close and hope for a good bounce near the end of the game. USC has the edge here, but the Longhorns have a formula to keep things interesting.

Florida’s Week 2 tilt against Northern Colorado was canceled, so all we have to go off of is its showing against Michigan.

That didn’t go so well. Especially for the quarterbacks. Malik Zaire and Feleipe Franks combined to throw for fewer than 200 yards. And when the Gators’ passing game struggles, so does its running attack. Florida ran the ball 27 times for 11 yards against Michigan. To be clear, the Wolverines have a stout front seven. But that’s still rough for a Florida team that’s thrived on the ground in recent years.

Some of Florida’s ground problems have to be attributed to the lack of a quarterback threat. Zaire and Franks are both talented guys. We’ll likely see both of them against the Vols. One of them just needs to make enough plays to take that eighth defender out of the box.

There will be opportunities against the Vols. Georgia Tech, triple option and all, averaged 12 yards per pass attempt against them.

This game is a true toss-up. But you have to like Florida’s defense. If the Gators’ offense is OK, they have a real shot.

Here’s how much we expect of Guice: He’s run for more than 100 yards and scored two touchdowns in each of his first two games, yet he’s gotten little buzz.

Sure, that’s partly a function of LSU’s soft early schedule. But Guice, a darkhorse Heisman candidate before the season, could break out on Saturday night against the Bulldogs.

Remember, we’re talking about the guy who averaged 8.5 yards per carry as a freshman and 7.6 yards as a sophomore. He wasn’t a focal point of the offense at this time last year. Guice carried the ball just five times (for 19 yards) against Mississippi State in 2016.

This game feels like it could be Guice’s coming out party, though. The Bulldogs have three tough consecutive games looming: vs. LSU, at Georgia and at Auburn. Leonard Fournette ran for 147 yards and two scores in this matchup last year. Expect Guice to do about the same.

Everyone’s talking about a different Oklahoma team this week, for obvious reasons. But don’t expect the Sooners to run away with the Big 12. Their in-state rival is hungry and good.

Oklahoma State has piled up 103 points and 1,145 yards though two games. Yes, that was against Tulsa and South Alabama. And Pittsburgh should be tougher. The Panthers kept things respectable against Penn State.

But the Cowboys should roll here. Mason Rudolph to James Washington is one of the most devastating connections in college football; Washington is so fast, he makes life easier for the rest of the Pokes. He’s like a great shooter in basketball, creating a ton of space that opens up windows for his teammates to operate. This whole Oklahoma State attack is legit. But it’s special because of Washington.

Something to keep an eye on for OSU: You’d like to see Justice Hill get back on track after a rough Week 2, when he averaged 2.2 yards per carry. (He ran for 132 yards in Week 1.) Oklahoma State has abandoned the run too easily in the past, and if it’s going to beat Oklahoma later this year, it’ll need a diverse offensive attack.

Hill gives them that element. Expect a big week for him and the Cowboys against the Panthers.