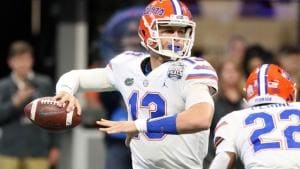 
Football, at long last, is almost back. That means Saturdays (and Tuesdays, Wednesdays, Thursdays, Fridays — and other days) will have college football games for the next four-plus months. Rejoice!

With the 2019 season getting here, let’s take a look at what’s in store for Week 1 and what’s known as Week 0.

This game opens what’s called “Week 0” for the FBS. Last season, Florida came from outside the preseason Top 25 to finish with a Peach Bowl triumph and a spot in the top 10. Could Miami do the same trick this year? Though the Hurricanes started No. 8 nationally in 2018, they finished only 7-6. Miami doesn’t have a preseason ranking this fall, but the Hurricanes are probably thinking this is going to be a rebound year.

Clemson is the defending national champion and brings back a ridiculous group of talent (especially on offense). Georgia Tech has a new head coach in Geoff Collins who’s tasked with taking the Jackets to Death Valley for his first game. This is also the first game for preseason No. 1 Clemson.

Utah is a popular pick to play in the Rose Bowl for the first time in program history. Even though this isn’t a conference game, rival BYU could upset the narrative that the Utes are a darkhorse national title contender.

Wisconsin started the 2018 season ranked No. 4 but finished a disappointing 8-5 — even with Jonathan Taylor winning the Doak Walker Award. Here’s the first task for the Badgers in proving last year was just a blip.

Northwestern upset the Cardinal in the first game of 2015, a win that likely kept Stanford out of the College Football Playoff — Stanford finished No. 3 in the final major rankings. This year, AP No. 25 Stanford meets Coaches No. 25 Northwestern as both teams hope the nonconference game springboards what could be a big season.

If UCF’s two-year run as the Group of 5 participant in the New Year’s Six ends, Boise State might be one of the top options. Florida State may not come in with a gaudy national raking, but it would still be a big name to conquer. If there are no undefeated Group of 5 teams, a one-loss Broncos team could stand out from the pack if they beat the ‘Noles.

A showdown between two top-25 teams that will likely push one toward the top 10. Oregon starts closer at No. 11 in the AP Poll, plus the Ducks bring back QB Justin Herbert. If Herbert can stay healthy, Oregon is an obvious Rose Bowl contender. As for Auburn, the Tigers still have Texas A&M, Florida, LSU, Georgia and Alabama on the schedule after this one. Whew.

Fresno State went only 4-20 in 2015 and 2016 before Jeff Tedford took over. Since then, the Bulldogs are 22-6, including a huge 2018 season that saw them go 12-2, win the Mountain West title game and finish No. 18. But 2018 wasn’t so kind to the Trojans, as Southern California struggled to 5-7 under coach Clay Helton. After this game, Southern California will then have to navigate Stanford, BYU, Utah, Washington and Notre Dame in its next five games.

The football season officially begins with Villanova-Colgate kicking off at noon and then Youngstown State-Samford in the afternoon. Colgate has a No. 14 ranking in the FCS Coaches preseason poll.

The Gophers are in Year 3 of the P.J. Fleck era, a big milestone where coaches and programs could see marked improvement. But SDSU won’t be a pushover. The Jackrabbits are No. 4 in the preseason FCS Coaches Poll. Both teams would love to get the ground game rolling.

Indiana State is one of five Missouri Valley Football Conference teams to start ranked, as the Sycamores are No. 16 in the rankings. But Kansas probably thinks it’s ready for a turnaround by bringing in former LSU coach Les Miles.

UNIFORMS: The best new looks for the 2019 season

There are big expectations in Ames this year. Iowa State is No. 21 in the AP Poll and has posted back-to-back eight-win seasons under coach Matt Campbell. Oklahoma is Oklahoma and Texas might be Texas again, but there’s room for ISU to make a move now. However, Northern Iowa is ranked in the FCS preseason and beat Iowa State in 2016.

The Mountaineers got as high as No. 6 in the country before ending 8-4 as QB Will Grier finished fifth in the Heisman voting (3,864 passing yards, 37 TDs). But coach Dana Holgorsen is now at Houston, allowing Troy coach Neal Brown to take over at WVU. He’ll have a tough FCS foe for his first game: No. 2 James Madison.

The Eagles came up short in the FCS title game, falling to North Dakota State to end up 12-3. QB Eric Barriere is back to lead an offense that averaged 43.1 points per game. He totaled 2,450 passing yards and 24 touchdowns and added 613 rushing yards and eight scores. The FCS preseason No. 3, EWU won’t be intimidated; Eastern Washington beat Washington State in 2016 and is used to playing FBS programs. This won’t be an easy opener for Rose Bowl contender Washington.

The Bison have won six of the last seven FCS titles, though they have a new coach and quarterback. Coach Chris Klieman is at Kansas State and QB Easton Stick is on the Los Angeles Chargers. Still, NDSU is the preseason No. 1 (like there could be anyone else) as coach Matt Entz takes over. Redshirt freshman Trey Lance will be the new starting QB.

College football Week 1 preview: What to watch out for

1. How will Clemson handle being preseason No. 1?

Though Clemson is coming off winning national championship No. 3, this is the first time in program history the Tigers are the preseason No. 1. So it’s never dealt with this level of expectations before. But part of that optimism is sophomore QB Trevor Lawrence, even if that ridiculously dominant defensive line has turnover. Save for a close call against Syracuse last season, the Tigers were so far ahead of the ACC that it would be surprising to see them falter.

2. Which big-name second-year coaches will show signs of seeing the most improvement?

There is a big bucket of coaches starting their second seasons with their teams. But the biggest ones hoping — and expecting — for a rebound season are probably UCLA’s Chip Kelly, Nebraska’s Scott Frost, Tennessee’s Jeremy Pruitt and Florida State’s Willie Taggart.

Of that group, Frost is likely in the best spot, even with the Huskers going 4-8 last season. QB Adrian Martinez passed for 2,617 yards and rushed for 629 yards as a freshmen, plus the Big Ten West is there for the taking. Of all the teams to post losing records last season, Nebraska is the only one to start ranked. The Huskers are No. 24 in the AP Poll.

Here’s how these want-to-improve programs open this season:

3. How will new-look Ohio State look?

Ryan Day was the Buckeyes’ acting coach for three games while Urban Meyer was placed on administrative leave, but this is the first time where Day is the full-time head coach. Though QB Dwayne Haskins and his 50 passing touchdowns left for the NFL, the Buckeyes should be potent on offense with Georgia QB transfer Justin Fields and RB J.K. Dobbins. The defense also brings back a bunch of talent like LB Malik Harrison, and should be better.

But is this the year “That team up North” finally solves the Ohio State riddle? OSU put up 62 on the Wolverines in Columbus last year. This season, Day’s bunch opens up with Florida Atlantic.

Final stop: The Ohio State University @MariaTaylor and @sportsiren get a tour of Ohio State’s facilities from Jonathon Cooper and catch up with Ryan Day.

4. Alabama-Clemson watch: Can anyone threaten the pair’s grip at the top?

Georgia has been close the last two seasons, with the Bulldogs losing to Alabama in the CFP title game and then the SEC Championship Game. So UGA is an obvious candidate — and the Bulldogs are No. 3 in the preseason poll.

Ohio State is probably next, though the 31-0 drubbing to Clemson in its previous CFP appearance hovers over things.

Oklahoma has been getting the chance to challenge the duo. The problem is the Sooners haven’t delivered. They lost to Clemson in the 2015 CFP semifinals, dropped another semifinal to Georgia in the 2017 season and then again dropped a semifinal game to Alabama this past season.

But because of how close it’s been recently, Georgia is likely the closest to asserting itself into what’s the Big Two.

5. Who are the darkhorse Heisman hopefuls?

After those two, it’s best to look at which quarterbacks will likely be in the title chase. Georgia’s Jake Fromm, Texas’ Sam Ehlinger and Oklahoma’s Jalen Hurts must be mentioned.

If you’re looking at other big names that could find their way to New York: Oregon QB Justin Herbert, Wisconsin RB Jonathan Taylor (would likely need another 2,000 yard season), Michigan QB Shea Patterson and Nebraska QB Adrian Martinez. Finally, if you’re looking at a player who could gain traction even on a 7- or 8-win team, look at Purdue’s do-it-all star Rondale Moore.