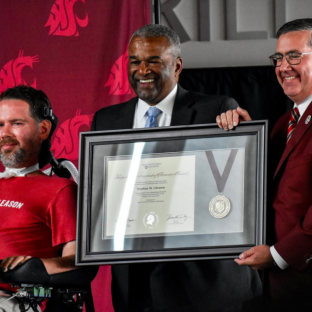 The award is the university’s highest honor for alums.

“Steve Gleason epitomizes the essence of ‘Cougar Spirit,'” WSU president Kirk Schulz said in a university release last month. “His passion to persevere, and succeed, despite life’s challenges, has inspired thousands, not only in the United States, but around the world.”

Gleason was a two-sport athlete was WSU from 1996-99. He played baseball and football, where he was a two-time captain. Gleason, a Spokane native, accepted the award in person in Pullman on Thursday.

“It’s quite an honor,” said Gleason, who communicates using a speech-generating device by moving his eyes to ‘type’ on a computer tablet attached to his wheelchair. “I have great memories from here. It’s always nice to be in town. Although, I have to admit, until a few weeks ago, I thought that ‘regents’ was just a cafeteria where all the athletes used to eat lunch an dinner on campus. I have great football and baseball memories, but what makes my experiences at WSU so incredible are the memories that have nothing to do with athletics. Life has led me to New Orleans, but my roots are still here in the Palouse.”

The former Cougars linebacker played safety for the New Orleans Saints from 2000-07. He was diagnosed with ALS in 2011, and from the very beginning, he vowed to fight the disease. Since then, even though Gleason has lost the ability to move or speak, he has become a leading spokesperson for ALS. He founded the Team Gleason Foundation to raise awareness of ALS and raise money for ALS research.

In 2016, the biopic Gleason was released, to very favorable reviews. The documentary-style movie was fully authorized by Gleason and allowed the world a glimpse into the trials and tribulations of the life of a person suffering from ALS.

@Coach_Leach on Steve Gleason @TeamGleason, who will be honored with WSU’s Regents’ Distinguished Alumni award on Thursday pic.twitter.com/H67o9L96XM

Gleason has maintained close ties to the WSU football program. In August 2016, the Cougars christened one of the lounges in their Football Operations Building the “Steve Gleason Recruiting Lounge” in his honor.

The naming opportunity came courtesy of WSU alum Glenn Osterhout, a 1983 WSU graduate who donated $250,000 to have the recruiting lounge named after Gleason.

This article is written by Stefanie Loh from Seattle Times and was legally licensed via the Tribune Content Agency through the NewsCred publisher network. Please direct all licensing questions to legal@newscred.com.