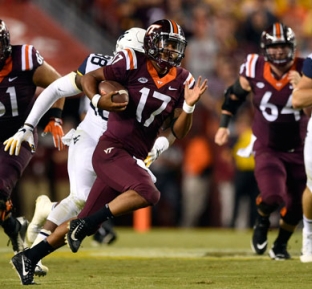 LANDOVER, Md. — Virginia Tech made FedEx Field feel like Lane Stadium Northeast and got to bring that Black Diamond Trophy back to Blacksburg for the first time in more than a decade.

Oh, and the Hokies’ new quarterback looks like a keeper, too.

Josh Jackson passed for 235 yards, ran for 101 and accounted for two touchdowns in his first start for Virginia Tech, and the No. 21 Hokies made a last-second stand to beat No. 22 West Virginia 31-24 on Sunday night.

The 52nd meeting between the Appalachian region rivals was the first since 2005. It ended up being a classic. The Hokies rushed the field after their defense held the Mountaineers out of the end zone on two last plays from the 15, and their fans screamed along to Metallica’s “Enter Sandman” to celebrate.

“This was a fantastic win,” Virginia Tech safety Terrell Edmunds said with a huge grin.

Jackson, the redshirt freshman who won a three-way competition for the job, was up and down with his passing, but showed off some nifty moves running in the opener for both teams.

Josh Jackson’s 46-yard keeper up the middle — which ended with him taking a hard low hit — set up Travon McMillian’s 3-yard touchdown run that put Virginia Tech up 31-24 with 6:30 left.

“I felt that one pretty good,” Jackson said about the hit.

Jackson said he read a blitz on that play and the Mountaineers gave him all kinds of room inside.

“That was a bad, bad call by me,” West Virginia defensive coordinator Tony Gibson said.

He got one more chance to tie after usually reliable Virginia Tech kicker Joey Slye missed a 32-yard field-goal attempt with 1:55 left.

Grier slinged and scrambled West Virginia down to the Virginia Tech 15. Hokies coach Justin Fuente used a timeout before the last two plays because he was worried his defense was getting gassed chasing the shaggy-haired quarterback.

“You just want them to hold on for one more,” Fuente said.

Grier’s second-to-last pass into the end zone under pressure was a little behind David Sills and it went through the falling receiver’s arms.

“I thought I had him,” Grier said. “I got hit and I couldn’t see. I thought he caught it. That’s the one I’d like to have back to get it up more for him.”

It was a tough ball to catch, but Sills wasn’t hearing that.

“I just got to make that play,” he said. “That’s really all it comes down to.”

Grier’s last throw sailed high and away, but a couple of penalties on the West Virginia offensive line made it moot.

West Virginia: Along with breaking in Grier, West Virginia is looking to find him some reliable targets from an inexperienced bunch. Sills (nine catches, 94 yards and two touchdowns), the former quarterback prodigy-turned-receiver, and Gary Jennings Jr. (13 for 189 and a 60-yard touchdown that tied it at 24 early in the fourth quarter) looked good against a Virginia Tech secondary that ranks among the best in the Atlantic Coast Conference.

Virginia Tech: The Hokies are going with a committee of running backs and 190-pound sophomore Deshawn McClease made a case to be in the mix along with Steve Peoples and Travon McMillian. McClease slipped three tackles on the way to a 12-yard touchdown run in the third quarter. He finished with 51 yards on eight carries.