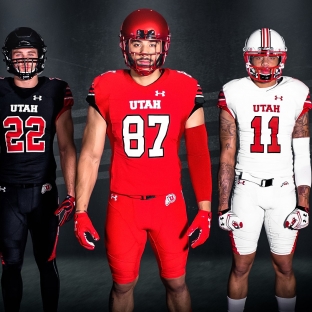 Utah released new uniforms for the 2017 season Tuesday morning. The new threads come in three colors — red, white, and black. Most noticeably, gone is the mountain design on the shoulder pads, replaced now by the “Utah Stripe.”

“For Utah athletics, Under Armour has previously utilized a mountain-themed design inspired by the Wasatch mountains,” said Adam Clement, Senior Design Director, Apparel – Team Sports at Under Armour. “As we worked to redefine the ‘Utah’ aesthetic, we wanted to find a design element that felt timeless, versatile, athletic, but most importantly specific to the university.  As often is the case, history afforded us our best lesson, and a quick look back confirmed the university already had a dynamic stripe, one that is known by name (the Utah stripe) within the athletic industry.  Our efforts therefore were centered around bringing that stripe back into circulation to represent all of Utah athletics, but within each sport finding ways to put a twist on the expected through use of color, angle, and placement.”

The uniforms definitely look clean, and while Utah only unveiled three color combinations, the team will mix and match throughout the season. Fans will see them in action for the first time when the Utes take on North Dakota on August 31st.

Check out some views here: