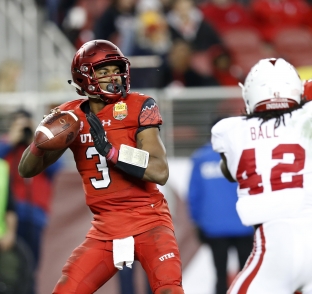 SALT LAKE CITY — Utah is tired of the close calls.

Utah has gradually progressed as a program since joining the Pac-12 in 2011 and is one of five teams in the nation to be ranked in every College Football Playoff weekly poll since it began in 2014. Still, the Utes have yet to reach the conference championship game.

Utah opened fall camp Friday with a brand new, fast-paced, pass-first offense led by first-year coordinator Troy Taylor. This is the first time coach Kyle Whittingham has stepped away from his run-heavy, grind-it-out scheme since taking over in 2005.

“We’ve been running the heck out of the ball for a lot of years and the last three years, in particular, haven’t gotten over the hump,” Whittingham said. “We’ve got to be better throwing the football. That’s (Taylor’s) forte. That’s his area of expertise. That and quarterback development.

“That’s the two areas that really need to be bolstered and that’s his cup of tea.”

The receivers feel more involved and believe they’ll be put to better use. The quarterback competition is technically open, but it would be a surprise if Troy Williams wasn’t named the starter for a second consecutive year. He threw for 2,757 yards, 15 touchdowns and eight interceptions last season while completing 53.1 percent of his passes in 2016. The 6-foot-2, 208-pound senior is more comfortable considering he’s run the progression-based scheme before as a freshman at Washington before transferring. Williams is one of many on the roster who feel they let 2016 get away after losing three of the final four Pac-12 games.

“I want to put up 50 a game to show the world we’re not messing around,” Williams said.

The Carson, California native didn’t back down when asked if that was a realistic goal.

Go behind the scenes on the first day of @Utah_Football fall camp (and stay for the jukes, hurdles and sweet catches)! #goutes pic.twitter.com/aF7lL3Rdan

Sophomore receiver Siasoi Wilson added, “I feel like all eyes are on us. … They’ve got a good offense now, so what’re they going to do with it?”

Utah has yet to rank higher than No. 8 in scoring offense since joining the league. Whittingham said he doesn’t have a set number he feels the Utes need to average, but 2016’s 77.78 red-zone conversion percentage that ranked No. 11 in the Pac-12 must improve.

“Last year, we had to have 50 against UCLA,” Whittingham said. “Some weeks you only need 20. I think it’s relative to the game. … I think that varies week to week based on the defense you’re playing and so forth.

The scheme alone should get more production through the air, but the Utes hope to have more talent at receiver.

Taylor was pleased with where the offense was at the beginning of camp because they’ve been working on it since spring, but he doesn’t have an expectation timeline.

“I just take it a day at a time in terms of what they’re absorbing and then I’ll move forward and kind of work at their speed,” Taylor said. “If I feel like we’re progressing too slowly, I’ll pick it up a little bit. It’s really kind of a feel thing. Every team’s different, every group’s different.

“We’ve got some brand new guys that just showed up. You can only go as fast as your slowest guy in terms of learning.”

That’s not slowing the optimism, though, within a roster that feels shortchanged after winning 28 games the last three years.

“I think we’re tired of coming close every year,” Singleton said. “We’re known as a defensive school. I feel like if we had offense these past three years with the defense we’ve been having, we should have been in the national championship (hunt).”

This article was written by Kareem Copeland from The Associated Press and was legally licensed through the NewsCred publisher network. Please direct all licensing questions to legal@newscred.com.