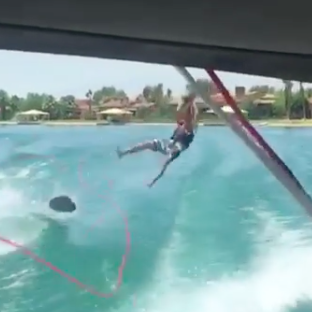 There are just over 50 days left before the start of the college football season and that means college programs are looking to put some finishing touches together before another year of action on the gridiron.

However, for players, that likely means workouts have started as well, but rest assured these student-athletes will find a way to squeeze every last drop out of their summer breaks.

The Trojans will play 12 consecutive weeks without a bye for the first time since 1995. #FightOn pic.twitter.com/Vp11AnEuLF

Darnold proved to be one of the top signal-callers in the country a year ago, throwing for more than 3,000 yards and 30+ touchdowns while leading USC to a 10-3 record — including a 52-49 win over Penn State in the Rose Bowl. He’ll look to do more of the same this year when he takes his first snap under center on Sept. 2 against the Broncos of Western Michigan.

In this case fans get a good glimpse of Darnold’s ability to throw on the move. The kicker: He’s seated on a moving speedboat as he throws a pass to a wakeboarding friend.

Sure, Darnold is used to having receivers lay out for him but this takes things to a whole new level. Mind you, the receiver in this case — fellow USC student Sean Morrisey — is an incoming freshman on the men’s volleyball team so he’s no slouch in the athletic department.

Suffice it to say either end of this play is enough to get the juices going for USC fans. Just a few months away from the season’s kickoff, but clips like this could keep fans happy all offseason.