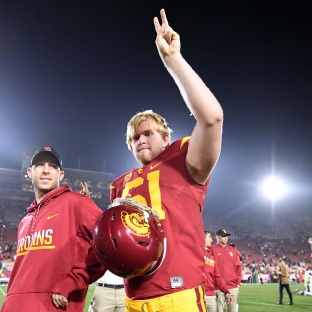 USC called a timeout before attempting an extra point after the No. 4 Trojans scored a touchdown late in the fourth quarter of their 49-31 win against Western Michigan. They put in Jake Olson, a redshirt sophomore long snapper, who has been involved with the USC football program since 2009, when he lost his eyesight at the age of 12 due to cancer.

It was the first snap of Olson’s career and it was on the money. Kicker Chase McGrath’s point after attempt was good, giving the Trojans their final point in their season-opening victory.

Kudos to the USC coaching staff for giving Olson the opportunity, and congrats to Olson on his special moment. Watch the play below.

This is anything but a regular PAT.

Jake Olson, blind since age 12, just snapped for the first time in a live game. https://t.co/amyHcFoVue