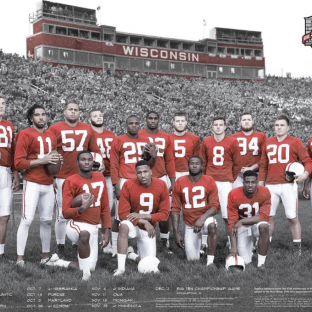 College football: The best schedule posters and wallpapers for 2017

Here are some of our favorites for 2017.

Pick your’s up at our Football Fan Fest on Saturday, August 26th!#GoBears pic.twitter.com/QDsrwaCXnv

Cal embraced the blue in its color scheme for its 2017 schedule poster, with stormy skies brewing in the background above California Memorial Stadium. The yellow on the poster jumps off the screen.

One of the most exciting moments in a football game is when the home team runs from the locker room, out the tunnel and onto the field. Colorado’s poster captures that experience. The inclusion of the Colorado state flag is a nice touch.

The Gators created a simple but aesthetically pleasing wallpaper for Florida fans’ phones. The player fading in to the background is a cool effect.

Get yours at Fan Day this Sunday!

Florida State’s 2017 schedule poster is symmetric, and loaded with some of the best players in college football: quarterback Deondre Francois, defensive back Tarvarus McFadden and center Alec Eberle, to name a few. The flaming arrow stuck in the ground is a good addition.

Similar to Colorado’s poster, Iowa captured the moment of the Hawkeyes getting ready to take the field. Their poster emphasizes the unity of the entire team.

#BBN, don’t forget, all of our posters are available for on Fan Day! Doors open at 9 am! See ya there! #GoToWork pic.twitter.com/ndZPf6DaRt

The Wildcats have seven different posters, each featuring a different player and different combination of motivational messages. Kentucky definitely has one of the more unique poster designs.

Michigan took a new approach to displaying its schedule on its poster by creating a pinwheel effect with the Big Ten trophy in the center. It’s one of the sleeker posters of 2017.

Your 2017 season lock screens are here!

Who would you like to see featured next? #GoBlue pic.twitter.com/SuN2QsvD70

FIRST LOOK: Check out the official 2017 poster! It will be first available at Meet the Spartans (Aug. 23) at Spartan Stadium. @PosterSwag pic.twitter.com/37ljbExZe5

“Go Green! Go White” is a chant that can be heard throughout Spartan Stadium and Michigan State embraced the cheer for its 2017 poster. The Spartans included a player in each color jersey, which is very fitting for the school.

Mississippi State’s poster just feels fast. The faded “Welcome To Fabulous Starkvegas” sign is a neat touch, as is the home games in bold colors at the bottom of the poster.

Mizzou released a teaser video for its 2017 schedule poster, which is labeled “Show Me,” a nod to Missouri’s moniker as the “Show me state.” The Tigers’ black and yellow color scheme looks great on a poster.

For your , a little #OUDNA.

The season opener is just month away! pic.twitter.com/ZtMkJkL75D

Oklahoma embraced the 21st Century with cell phone wallpapers for Sooner fans. The red paint splatter is a sleek design and the outline of the Oklahoma “O” is sure to be popular among the fanbase.

Need a background for your computer? We have you covered! Click here to download —-> https://t.co/o04C4dvssm #HottyToddy pic.twitter.com/yseFC82PIe

The personal touch of Marquis Haynes, with his portait shot, signature and quote is a cool look for a computer background.

The Nittany Lions took a creative approach to their 2017 schedule poster. Fans can remove part of the facemask and put their own faces in the poster, as shown by quarterback Trace McSorley in his tweet below.

The 2017 season posters are in and we’re handing them out tonight in downtown State College #PSUgameface pic.twitter.com/yhPVgLbE0V

Hey Charlotte Gamecocks, we will be at the Bojangles at 5321 Old Dowd Road today from 4PM to 6PM! Stop by to get your 2017 season posters! pic.twitter.com/1yMOYkzsPE

South Carolina’s poster is another that feels “fast.” The smokey red and blue effects on black background looks very cool.

Texas’ 2017 schedule poster focuses on the Longhorn brand, with a player holding up the Longhorn sign with his hand.

Here’s an i phone screen saver for you! Fight On #TrojanMade pic.twitter.com/o7C5la7zzg

The Trojan football wallpaper doesn’t feature any USC players but it does emphasize some of the program’s many impressive achievements. The yellow and red text stand out against the black background in this clean design.

The Utes’ wallpaper feels like it’s going to jump off the screen. The black and white schedule, differentiating home and road games, is a nice touch.

Vandy utilized its black and gold color scheme for its 2017 schedule wallpaper.

The “Purple Reign” theme for Washington feels powerful and should make Husky fans excited for the season.

First look at this year’s senior schedule poster, which throws it back in honor of #CampRandall100#OnWisconsin pic.twitter.com/TPx5HXASBy

The Badgers went old school this year in honor of the 100th anniversary of Camp Randall Stadium. The poster is in black and white, with the exception of the players’ red jerseys and Wisconsin’s red press box, which is a really cool look. As many schools embrace new-age graphics and edits, the Badgers went in the opposite direction and embraced the history of their school and the sport.