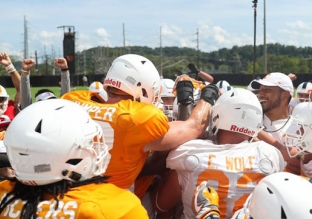 When Eli Wolf stepped into the ‘Circle of Life’ drill with his brother, Ethan, during Tennessee’s practice on Tuesday, he probably wasn’t expecting much more than a normal day at camp.

But the redshirt sophomore tight-end was in for a life-changing surprise. Before the starting whistle blew, Vols head coach Butch Jones stepped in with a big announcement.

After practice, Wolf’s teammates took to Twitter to congratulate him on being awarded a well-deserved scholarship.

Since day 1 been the hardest worker I know always told ya it’d come!!! Love ya kid @EliWolf16 https://t.co/UungFOhGmv

Eli Wolf was not a starter but made one catch for 8 yards for the Vols last season against Tennessee Tech.

Ethan, a senior tight end, was just as surprised as Eli about the scholarship but was equally as excited for his younger brother.

Earning the scholarship meant a lot to another member of the Wolf family as well. James Wolf, Eli and Ethan’s father, thanked the UT coaching staff and administration for their belief in his son and said that it’s hard to find much that’s more special than “seeing my kids’ perseverance and dedication be rewarded.”

Awesome moment for Eli Wolf to start his sophomore season and even more awesome that he got to share it with family.