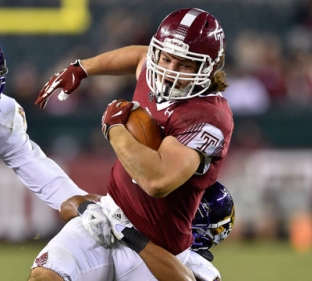 Who needs a DJ to provide pre-practice tunes when you can have live music? Certainly not the Temple football team.

The Owls enlisted the musical services of redshirt senior Nick Sharga to open practice on Wednesday.

The fullback was voted by teammates to wear a single-digit jersey in 2015, an honor awarded to the toughest players on the team.

Sharga taught himself to play the electric guitar at 13 and even though football is his main focus, he says playing a little everyday is a great outlet.

He gained some new fans yesterday as the rest of his team rocked out to his performance as they made their way onto the field.

Who needs a DJ when you’ve got @RealSlimSharga ?

THAT’S how you open a practice. pic.twitter.com/LaNhsy9awo

Good to know we aren’t the only ones who enjoyed Sharga’s rockstar moment.