College football teams with the most Heisman Trophy winners


LSU’s Joe Burrow won the most recent Heisman Trophy, winning it in a landslide in 2019. Jalen Hurts (Oklahoma), Justin Fields (Ohio State) and Chase Young (Ohio State) were the other finalists.

Ohio State and Oklahoma are currently tied alongside Notre Dame with the most Heisman Trophies for a program in college football history with 7. Burrow became LSU’s first Heisman winner in 60 years.

Archie Griffin did something in 1974 and 1975 that has never been matched. The Ohio State running back became the first and only player ever to win a second Heisman. At 5-foot-9, 180 pounds, he was the Buckeyes starting tailback all four years, at time in which they tallied a 40-5-1 record and four Big Ten titles. Through 12 games as a junior, Griffin rushed 1,695 yards for 12 touchdowns. As a senior, he showed more versatility, rushing 1,450 yards for four touchdowns and receiving 170 yards on 14 catches.

Kyler Murray, the born and bred Texan who originally signed with Texas A&M, found his footing in Oklahoma in the shadow of Baker Mayfield’s 2018 Heisman performance. No pressure, right? The junior quarterback closely mirrored Mayfield’s senior season, passing for 4,054 yards and 40 touchdowns and leading Oklahoma to a 12-1 record, a Big 12 title and a College Football Playoff berth. In comparison, Mayfield threw for 4,340 yards with 41 touchdowns and led the Sooners to their first CFP.

WALK-ONS: 13 of the best walk-ons in college football history

In 2019, the cycle continues. For the third year in a row, an Oklahoma transfer quarterback is in the Heisman spotlight again. Jalen Hurts will try to be the Sooners’ eighth Heisman winner in program history. 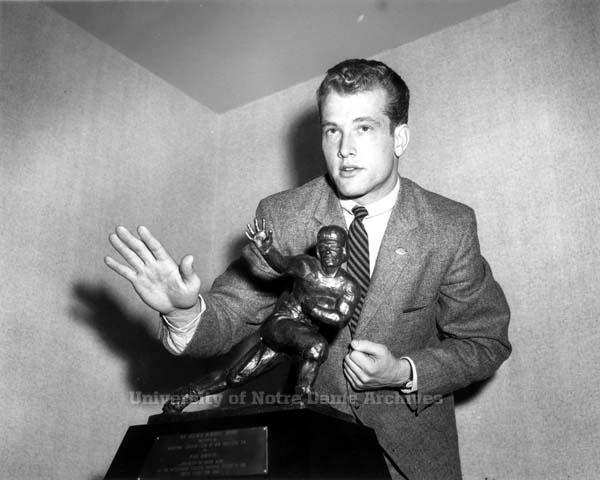 As of 2019, the two oldest living Heisman winners shared similar paths to their legendary careers. With nine years apart, John Lujack and Paul Hornung led their respective Notre Dame teams through strong senior seasons. Lujack, the oldest living Heisman recipient, completed 61 passes for 777 yards and ran for 139 yards on 12 carries, and Hornung rushed for 420 yards on 94 carries and completed 59 passes for 917 yards and three touchdowns.

Southern Cal has been a running back factory for most of its existence. All of the Trojans’ Heisman winners prior to Carson Palmer in 2002 had been running backs, and Marcus Allen added to that incredible run with his record-breaking 1981 season. Allen became the first player in FBS history to rush for over 2,000 yards in a single season. In total, he ran for 2,342 yards and scored 23 touchdowns. 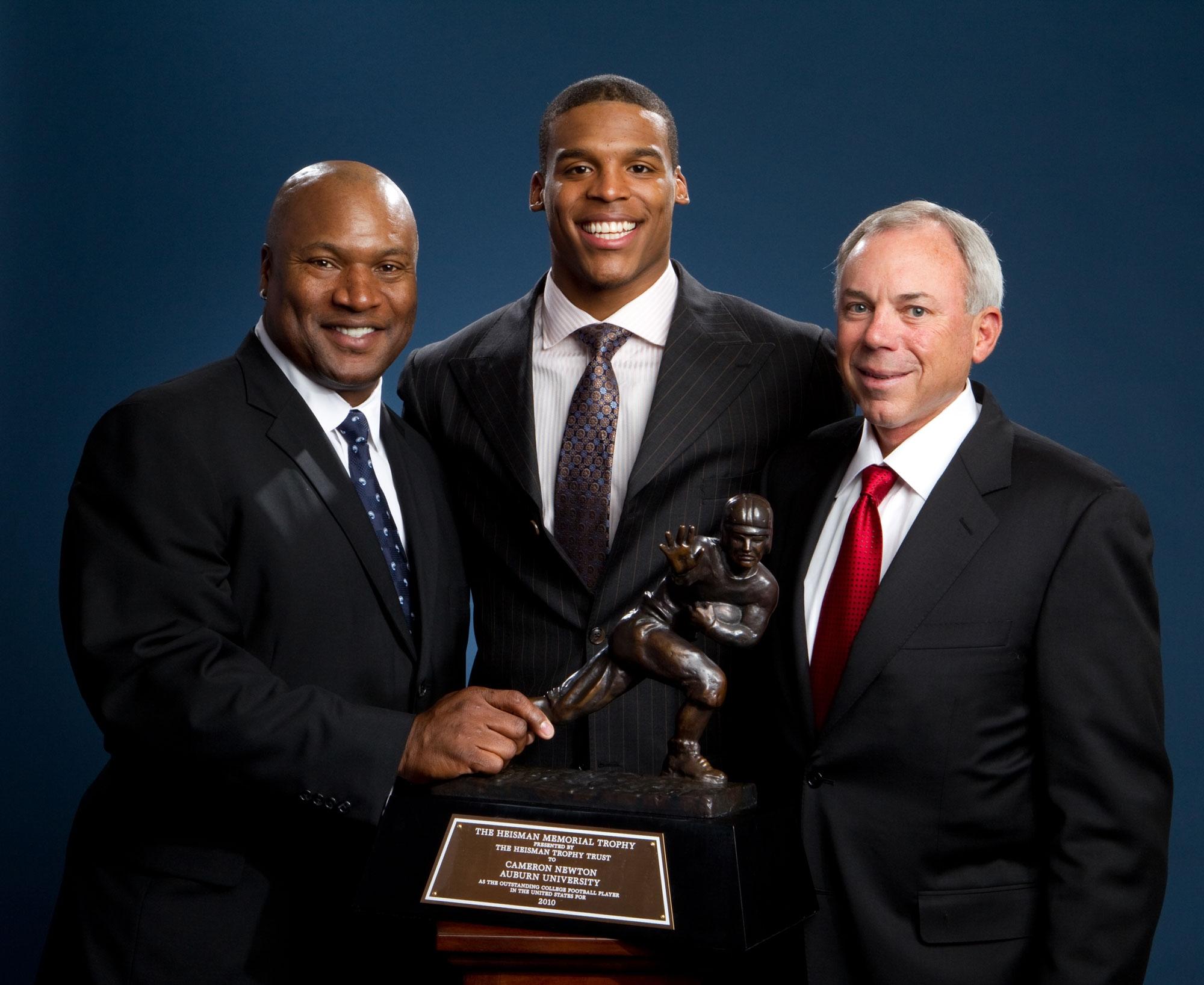 The namesake of the trophy awarded to the best FBS player each season belongs to John Heisman, former coach of the Auburn Tigers. The legendary name has been followed by many legendary Tigers players, including Auburn’s three Heisman Trophy winners — Pat Sullivan, Bo Jackson and Cam Newton. After setting several SEC and school records, Sullivan became the Tigers’ first Heisman recipient in 1971. The senior quarterback led Auburn to an undefeated season, throwing for 2,012 yards and 20 touchdowns. He was later honored SEC Player of the Year and selected to the All-SEC athletic and academic teams in 1970 and 1971.

NATIONAL CHAMPS: College football teams with the most national title

Bo Jackson earned his spot in sports lore as an elite two-sport athlete. Aside from baseball, it was his football career that garnered national attention. He became Auburn’s first and only running back to rush for more than 4,000 yards in a career. After rushing for 1,786 and 17 touchdowns his senior year, he edged Chuck Long for the Heisman in what remains the closest vote in the award’s history.

Lastly, there’s Cam Newton, who won the Heisman overwhelmingly in 2010. One year removed from backing up Tim Tebow at Florida, he became the first double-transfer to win the award after throwing for 2,589 yards, 28 touchdowns and six interceptions and rushing for 1,409 yards and 20 touchdowns. 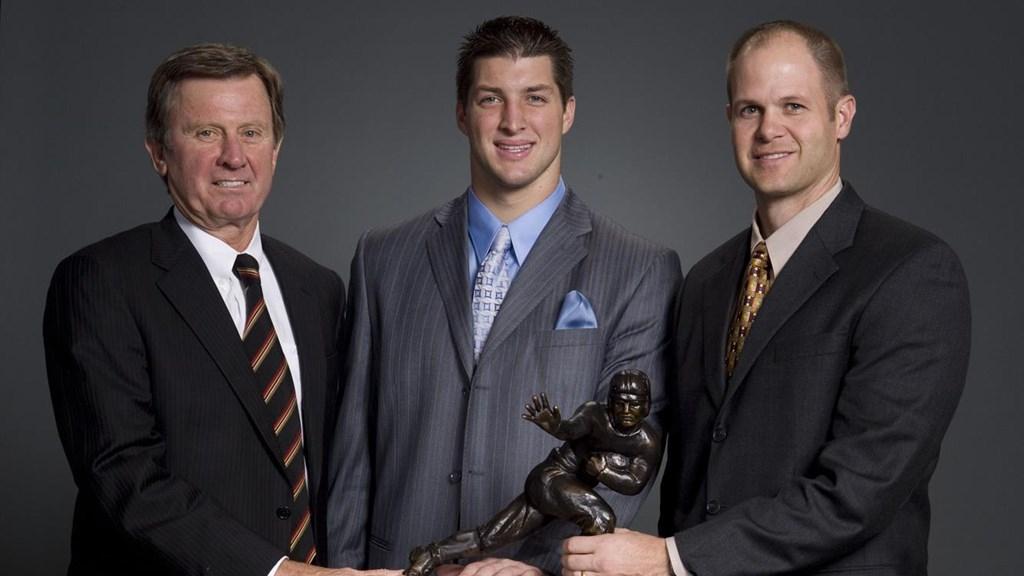 Some say Tebow changed the game of football. And for the three full years he manned Florida’s quarterback position, he was the face of the college game. He opened the door for football’s underclassmen by becoming the sport’s first sophomore to ever win a Heisman trophy. Oklahoma’s Sam Bradford and Alabama’s Mark Ingram then followed him in 2008 and 2009 as sophomore Heisman recipients.

The spread quarterback rushed and passed for 51 touchdowns and threw for 3,132 yards with just six interceptions in the 2007 regular season.

When mentioning a Florida Gator great, a Florida State Seminole legend must follow. For a program that has countless household names, Jameis Winston practically surpassed all. As a freshman, he led Florida State to its third national championship, becoming the first redshirt freshman to win a Heisman and national title in the same season. The two-sport athlete threw for 3,820 yards and 38 touchdowns for a 190.04 pass efficiency rating — the second-best among Heisman winners. He surpassed both his Seminole Heisman predecessors in season touchdowns while being the second freshman in history to win the trophy.

Desmond Howard was a spectacle to watch every Saturday. His acrobatic catches, key returns and high football IQ created a sound foundation for his award-winning junior season. He received for 960 yards and 19 touchdowns and rushed for 165 yards and two touchdowns. His Heisman pose to punctuate his score during the 1991 Ohio State-Michigan game captured the hearts of many. Well, maybe not Michigan fans. Overall, he won the Heisman with the second largest margin in the history of the award.

3 POINTS: The longest college football field goal — what we know

Six years later, Charles Woodson became one of the few players to win the Heisman with significant minutes on both sides of the ball. In 1997, he intercepted seven passes, collected 43 tackles and received for 231 yards and one touchdown to propel the Wolverines to a national title. 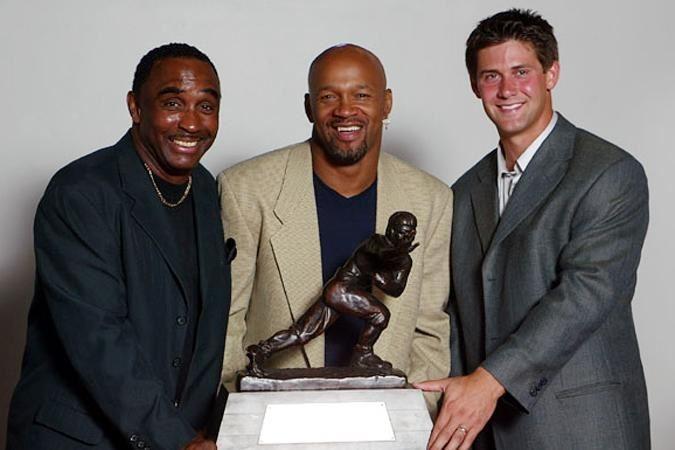 Noted as one of the best option quarterbacks ever, Eric Crouch combined 1,510 passing yards with a career-high 1,115 rushing yards and 18 touchdowns to secure the 2001 Heisman Trophy. In addition to the Heisman, he earned the Walter Camp Player-of-the-Year award and the Davey O’Brien quarterback award that year, as the Huskers went on to lose the Miami Hurricanes in the national title game. Crouch walked off the Nebraska campus holding 32 school records.

Heisman Trophy winners from 1935 to today