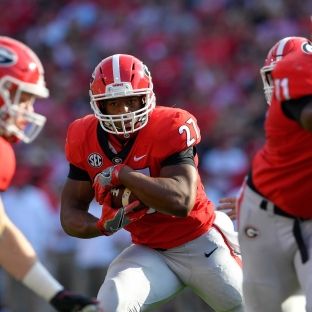 There is no such thing as truly controlling your own destiny on the field when in fact a committee controls some of it, but that’s not going to stop us from contemplating the question. We’ve taken what we know about past behavior in the fairly short-lived poll and created the following.

Here are teams that we assume control their own destiny entering Week 11, meaning each school has a strong, if not inarguable, case that it’s deserving of one of the four seats at the playoff table if it wins the rest of its games.

It’s never been just about a dream, it’s about the work we do to keep the dream alive. #ATD pic.twitter.com/szMlC76RsC

The Bulldogs claimed the top spot in the College Football Playoff selection committee’s initial rankings and proceeded to clinch the SEC East over the weekend with a win over South Carolina. Georgia’s remaining games are against No. 14 Auburn, Kentucky and Georgia Tech, then the SEC Championship game. If the season ended today, the ‘Dawgs would face Alabama for the conference title, but Auburn could make a late push for the SEC West crown.

Regardless of who Georgia plays in Atlanta on Dec. 2, the Bulldogs control their own destiny. If they win out, they are guaranteed a spot in the College Football Playoff as an undefeated SEC champion.

Almost everything that you just read about Georgia also applies to Alabama. While it seems ridiculous to question the validity of the Crimson Tide after three straight College Football Playoff appearances followed by an undefeated start in 2017, but they picked up their first win of the season against a team currently ranked in the committee’s top 25 rankings with a 24-10 victory over No. 19 LSU.

If Alabama wins out, it would be an undefeated SEC champion with wins over No. 19 LSU, No. 16 Mississippi State, No. 14 Auburn and No. 1 Georgia. The Bulldogs will be the No. 1 seed in the playoff if that happens.

A few moments from No. 3 Notre Dame’s win over Wake Forest. #GoIrish pic.twitter.com/bYjeyXPgY3

While it’s not an exact science, it’s safe to assume that if any of the top four teams in the committee’s initial rankings win out, they won’t fall out of playoff contention. If the Irish win out, they would finish the regular season 11-1 with their only loss being a 20-19 defeat against No. 1 Georgia.

Even without a conference championship game to potentially boost its resume, Notre Dame would have wins against No. 24 Michigan State, No. 20 NC State, No. 10 Miami and No. 21 Stanford if it wins out.

* = Can clinch ACC Atlantic with win against Florida State

Clemson proved last season that it could make the playoff as a one-loss ACC champion and there’s no reason why the Tigers couldn’t make the playoff if they win out. They can clinch the ACC Atlantic with a win against Florida State in Week 11. A win over a potentially undefeated Miami team in the conference championship game could be Clemson’s biggest win of the year and lock up its spot in the playoff.

in the Coaches Poll

Wisconsin should rise in the playoff selection committee’s rankings after the Badgers defeated Indiana, while No. 6 Ohio State and No. 7 Penn State both suffered their second losses of the season. If they Badgers beat Iowa, Michigan and Minnesota, then the winner of the Big Ten East in the conference championship, they’ll be an undefeated conference champion from a Power Five conference, which has never been left out of the playoff in its three-year history.

* = Can clinch ACC Coastal with one more win in the ACC

Highlights from last night’s win over No. 13 Virginia Tech. pic.twitter.com/fQvnsBLHyR

The Hurricanes earned their most important win to date with a 28-10 victory over No. 13 Virginia Tech in Week 10, with an even bigger opportunity in Week 11, when No. 3 Notre Dame travels to Miami.

If the ‘Canes run the table, which would likely include a win over No. 4 Clemson in the ACC Championship, they’d be an undefeated ACC champion. Florida State and Clemson made the playoff in 2014 and 2015, respectively, when they went undefeated and won the ACC, so precedent tells us Miami would have no worries on selection day. However, an undefeated ‘Canes squad or clearly not as secure as say UGA and Alabama. The Hurricanes, even without a loss, might have trouble if UGA and Ala

Ohio State and Penn State will likely drop in the next edition of the committee’s rankings, and head-to-head wins over No. 3 Notre Dame and No. 4 Clemson would allow Miami to shoot up the rankings in the next month.

* = Can clinch SEC West with wins over Georgia and Alabama

Relive the greatest moments from Auburn’s 42-27 @SEC road victory over Texas A&M in this week’s 60 Seconds of Glory.#WarEagle pic.twitter.com/pzO43xqxWD

Auburn’s remaining schedule puts it in a unique position of being able to knock off the No. 1 and No. 2 teams in the country a total of three times in the next month. One loss removes the Tigers from serious playoff consideration, but if they win out, they will have beaten No. 1 Georgia in Week 11, No. 2 Alabama in Week 13, and then the Bulldogs a second time in the SEC Championship.

While a two-loss team has never made the College Football Playoff, Auburn – if it wins out – would have wins over No. 1 Georgia (twice), No. 2 Alabama and No. 16 Mississippi State, plus an SEC championship to its name.

Ohio State made the playoff in 2014 despite being ranked No. 16 in the initial rankings and Oklahoma made it the following year after starting at No. 15. Auburn could be this season’s sleeper that makes a late push into the top four, but it requires three wins against teams that are currently undefeated.