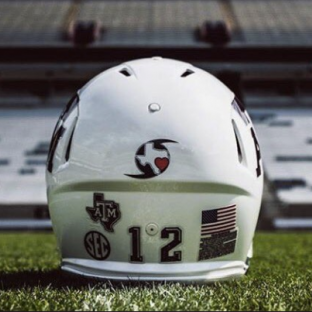 The devastation wrought by Hurricane Harvey in the Houston and Gulf Coast this week has been hard to watch unfold, and as the area continues to overcome this disaster, college football teams are making sure those affected know they’re not alone.

The college football community is stretching support for people affected by the flooding across the country with a fleet of helmet decals for this weekend’s opening slate of games, keeping Houston and its surrounding areas in players’ and fans’ thoughts even as football season kicks off.

On Thursday night, Ohio State and Indiana started by donning a Houston Strong decal in support of Hurricane Harvey relief efforts across the country:

A few teams decided to join together and utilize a Hurricane Harvey decal featuring a cyclone shape, the state of Texas, and a heart over the Gulf Coast and Houston area, including Utah, who face North Dakota State on Thursday evening:

Both Texas A&M and UCLA, who face off on Sunday:

In support of those affected by #HurricaneHarvey, we are proud to wear a #HarveyRelief helmet sticker on Sunday. #HoustonStrong pic.twitter.com/liPAO4TEL4

Mississippi State went with a pretty cool custom style all its own, with a bulldog spread across the outline of Texas for its opener against Charleston Southern on Saturday:

Our thoughts and prayers are with all those affected by #HurricaneHarvey. We will wear this helmet decal in their honor for Saturday’s game. pic.twitter.com/8pLRH75Mrh

And Florida also went with a unique design for its season opener against Michigan, opting for a tear drop filled with the Texas state flag:

Florida will wear special helmet decal vs. Michigan to help bring awareness to the families impacted by Hurricane Harvey pic.twitter.com/FF9zLwKu10