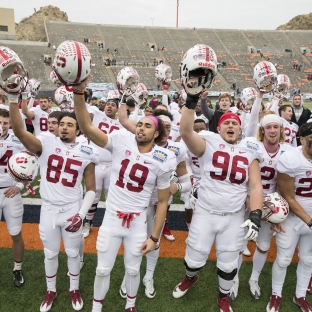 STANORD, Calif. — Few teams have to deal with losing as much top-end talent as Stanford.

With record-setting running back Christian McCaffrey and disruptive defensive end Solomon Thomas off in the NFL as top 10 draft picks, the Cardinal have major holes to fill if they want to improve on last season’s 10-3 mark and get back to the Pac-12 title game.

“I think we can play better,” coach David Shaw said. “We have a chance to be a better team than we were a year ago, a complete team, even though losing two of the better players in the nation last year.”

McCaffrey set a record with 3,864 all-purpose yards in 2015 and then rushed for 1,596 yards and scored 16 touchdowns last season. In those two seasons, the Cardinal went 18-1 when McCaffrey rushed for at least 100 yards.

Now Stanford hopes to get similar production out of Bryce Love, who averaged 7.2 yards per carry the past two seasons as the change-of-pace option behind McCaffrey.

“You’ve already seen glimpses of it,” quarterback Keller Chryst said. “He got maybe five carries a game, if that, and he went 60 yards to the house on a regular basis. With more carries, more touches, that will only increase his productivity.”

Stanford doesn’t have one player to fill the void left by Thomas, who had eight sacks and 15 tackles for loss last season as the leader of a young defense.

But with a much more tested two-deep roster this season, Stanford hopes to be a better defense collectively.

Here are some other things to watch this season for Stanford:

Chryst tore the ACL in his right knee in the bowl game but made it back in time to regain his starting job in fall camp. Shaw was pleased with how well Chryst has been able to drive off his injured leg and has not needed to limit him at all. Chryst was 6-0 as a starter last season with 10 TD passes and only one interception in those games.

While the Cardinal must figure out how to replace Thomas on the defensive line, the secondary should be outstanding. Quenton Meeks and Alijah Holder are a formidable duo at cornerback and Justin Reid is back at strong safety. That group should give the front seven a little extra time to get after the quarterback or key in on the run.

Stanford will be tested early with a road game against Pac-12 favorite Southern California on Sept. 9. The North Division could be decided in early November when the Cardinal travel to Washington State on Nov. 4 and then come back to host defending champion Washington the following Friday. The regular season ends with the traditional odd-year Thanksgiving weekend home game against Notre Dame.

Can’t help but smile for each day with the brothers and game we love. #Blessed#CardCamp17 #GoStanford pic.twitter.com/SDMft8HqgD

The Cardinal get an early start on the season, heading Down Under to take on Rice on Aug. 26 in Sydney. Shaw wants to get the most of the team’s preparation done before arriving in Australia to give the players a couple of days to take in the sights before gearing up for the game.

This article was written by Josh Dubow from The Associated Press and was legally licensed through the NewsCred publisher network. Please direct all licensing questions to legal@newscred.com.