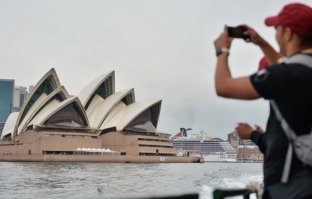 College football: Stanford arrives Down Under for season opener against Rice

Stanford football has only played one game outside of the U.S. – in 1986 for the Coca-Cola Bowl in Tokyo. But this week, the Cardinal arrived in Sydney, Australia ahead of its season opener against Rice.

Stanford will kick off its season on Aug. 26 at Allianz Stadium, but before the team got down to business, the Cardinal took some time to sightsee in the Land Down Under.

One of the first stops for the Stanford football team was to the famous Toronga Zoo, where junior cornerback Quenton Meeks squared off with an unusual opponent – a pelican.

Although Meeks’ animal encounter wasn’t so friendly, sophomore kicker Jet Toner got the chance to cozy up to a koala on Tuesday.

Special moment between sophomore @jet_toner and a koala bear.

Aside from seeing the wildlife of Australia, the team conducted practice on Tuesday at Moore Park and visited the University of Sydney for a tour, lecture and dinner. Wednesday’s activities consisted of a Sydney Harbour dinner cruise, selfie moments, and a press conference.

Selfie game on another level Down Under.

“We’re excited for the opportunity to kick off the college football season in Australia against Rice in what will certainly be a fantastic experience for our fan base and alumni,” said Bernard Muir, Stanford’s Director of Athletics. “I’m especially thrilled that our student-athletes will have this unique opportunity before fall classes begin to visit a new country and experience a different culture.”

Men at work Down Under.

The rest of the week before Saturday’s kickoff will be busy for the Cardinal. Aside from practices, the team will make a visit to a local children’s hospital and have dinner at the Consul General’s house on Friday, following a walk-through practice at Allianz Stadium. The game will replace a matchup against Rice previously scheduled for Sept. 2.