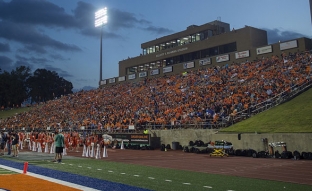 The Sam Houston season opening football game with Richmond, scheduled for Sunday night at Bowers Stadium, has been postponed with Hurricane Harvey approaching the Texas coast.

Officials with both Sam Houston and Richmond are in discussions about finding an appropriate date to play the game. That announcement will come at a later time.

“These storms can be difficult to predict and we want to have as much information as possible to make a decision,” said Director of Athletics Bobby Williams. “I want to thank everyone involved in this process as this is not an easy decision to make with all of the factors involved.

“Ultimately we need to do what was best for both team’s players and our fans who are travelling to the game,” he said.

College football: Stanford and Rice ready for showdown in Australia

The No. 3 Bearkats and the 7th-ranked Spiders were scheduled to open the season in front of a national television audience on ESPNU. Television and streaming options are still being discussed and will be released when there is a set plan for coverage.

The Sam Houston soccer game tonight against Jackson State will still be played as scheduled at 6:30 p.m. Sunday’s soccer game against Oral Roberts has been cancelled and will not be rescheduled.

The Bearkat volleyball team is currently participating in a tournament in College Station and all games are still scheduled to be played at this time.

This is the third football game at Bowers Stadium to be affected by a hurricane in the last 12 years. In 2005, the Bearkats had a home game against Missouri State cancelled when Hurricane Rita made landfall near Sabine Pass.

In 2008, the Bearkats cancelled a home game against Prairie View A&M because of Hurricane Ike which made landfall in Galveston and was the third-most costly hurricane in U.S. history.

In 2002, the Bearkats played Midwestern State at Bowers Stadium as Tropical Storm Fay passed through Huntsville. Playing in a driving rain, the Bearkats won the game 26-23.