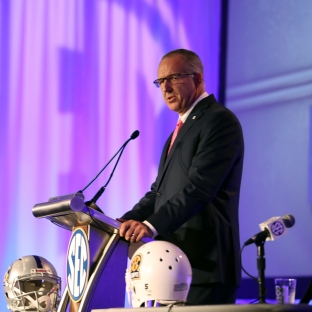 HOOVER, Ala. — Southeastern Conference Commissioner Greg Sankey opened the conference’s football media days talking about integration of sports in the league and the upcoming 50th anniversary of that moment.

Sankey talked at length Monday about Nate Northington’s debut on Sept. 30, 1967 for Kentucky against Mississippi. The commissioner gave a history lesson on the timeline of integration in the league, including when Northington, then a sophomore, becoming the first African-American to play in a varsity SEC football game.

Sankey said by playing in a football game, “Nate Northington affected us all.”

The commissioner did talk about other issues, including scheduling, recruiting and instant replay. But he devoted a lot of his time talking about integration.

Looking to the 2017 #SECFB Champ Game, we invite the four @UKFootball players to join us in honoring & celebrating what they helped change. pic.twitter.com/jcMY4bBpSO

Page, Northington’s roommate, died the day before the game from a neck injury sustained during a preseason practice. They were the SEC’s first black scholarship football players.

Kentucky has erected bronze statues of all four players. Sankey said the SEC has invited Northington, Hackett, Hogg and Page’s family to the league championship game in December “to join us in remembering, honoring and celebrating what they helped change 50 years ago.”

Hackett went on to become the SEC’s first black team captain in any sport.

Sankey also listed the first black varsity athlete to compete for each current SEC member. Then he recited lyrics from the U2 song “All that You Can’t Leave Behind”.

“What once was hurt, what once was friction, what left a mark no longer stings, because grace makes beauty out of ugly things,” said Sankey, quoting the song.

“Our journey is certainly not complete,” Sankey said. “There’s hurt. There still remains friction, but to those who helped us change and to those who will help us change in the future, thank you for the strength and the grace you’ve shown.”