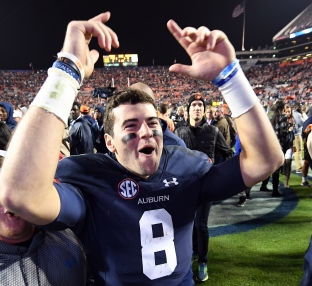 College football scores: No. 1, 3 and 6 go down; No. 2 Alabama barely survives

If it wasn’t for Jalen Hurts’ late-game heroics, something would have happened that hasn’t since 1966: the No. 1, 2 and 3 teams would have lost on the same day. Heck, No. 1 Georgia and No. 3 Notre Dame didn’t even come close to winning. They combined to get outscored 81-25 by No. 10 Auburn and No. 7 Miami, who are both now firmly in the Playoff race.

A tip for identifying hectic college football Saturdays in the future: when the best teams have to travel, it’s general a recipe for chaos:

Ballgame. Four Top Ten teams will lose on the road this weekend, but not Alabama. Barely not Alabama.

It’s funny how much time we spend talking about the underwhelming schedules of teams like Miami and Wisconsin, despite the fact that neither has lost a game. The question we heard all week: could Wisconsin go undefeated, win the Big Ten, and miss out on the College Football Playoff?

Sure, it’s a fun debate. But if the short CFP era has taught us anything, it’s that this is a survivor’s game. Alabama didn’t look great in its 31-24 win at Mississippi State. But it survived, and the Crimson Tide will likely be the new No. 1 team on Tuesday. Undefeated records shouldn’t be taken for granted, because it’s really, really hard to go undefeated. That’s an obvious statement, but sometimes we forget to acknowledge it. Wisconsin may not have the flashiest wins (Miami didn’t before; it does now). But those two teams haven’t slipped up a single week. There’s something to be said for avoiding duds, and while the “Could a 13-0 team miss the Playoff?” question is an entertaining one, it doesn’t acknowledge that the teams ahead of them probably aren’t going to run the table.

Oklahoma’s thrashing of TCU may not have been an upset, but it was entertaining nonetheless. Baker Mayfield did Baker Mayfield things, throwing for 333 yards and three touchdowns. The Sooners could be the No. 2 or 3 team by Tuesday, which is crazy when you consider the feeling around the program when it lost to Iowa State. The Cyclones look pretty good these days. Oklahoma looks unstoppable. A Big 12 team finally controls its own destiny.

Also, the ACC title game between Clemson and Miami just became a lot more interesting. The Hurricanes just stifled one of the best offenses in the country, and while the Tigers have found ways to win lately, they haven’t looked overly impressive. Circle Dec. 2 on your calendars.

Out west, is USC back from the dead? Just a few weeks ago, the Trojans lost 49-14 in South Bend. USC will likely be in the top 10 by Tuesday given Washington’s loss, and while the Trojans don’t control their Playoff destiny, they control their Pac-12 destiny. If they take care of business and a few more dominoes fall their way, USC could sneak into the semifinals. Who would have thought?

The season’s home stretch will be must-see TV.