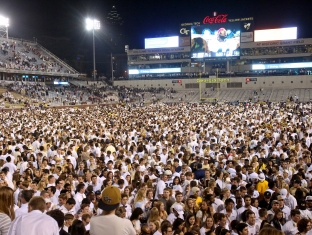 Much can happen in three years and change. The College Football Playoff didn’t even exist three years before. “Clemsoning” was still a thing. And instead of chasing CFP hardware in Ann Arbor, Jim Harbaugh was chasing Vince Lombardi trophies in San Francisco.

Three years is a long time.

On Oct. 24, 2015, it had felt like an eternity since Florida State last lost an ACC game. That’s because, well, it kind of had been. One thousand, one hundred and thirteen days, to be exact. Present one of these two scenarios before Georgia Tech faced the Seminoles on that autumn night, and you’d likely be laughed out of the conversation:

1) The Yellow Jackets, losers of five games in a row, would upset the Seminoles

2) Roberto Aguayo, the most accurate kicker in ACC history, would miss a clutch field goal

Georgia Tech head coach Paul Johnson instructed his players not to return the blocked kick to the end zone. They didn’t listen. It’s a good thing they didn’t, because we never would have gotten this reaction:

Or this amazing radio call:

Or even this hilarious self-deprecating tweet from Florida State:

The scene outside of Bobby Dodd was mayhem. Fans were out and about all the way to McCamish Pavilion, home of the Georgia Tech basketball team. (Bobby Dodd and McCamish are located more than a half mile away from each other).

With the win, the Yellow Jackets improved to 3-5 on the season. But that didn’t matter. What did matter were the tens of thousands of people that got to witness one of the most exciting plays in college football history in person, and the millions more that watched from afar.

Happy anniversary to the Miracle on Techwood Drive. Chances are, you’ll be remembered on this day for a long, long time.