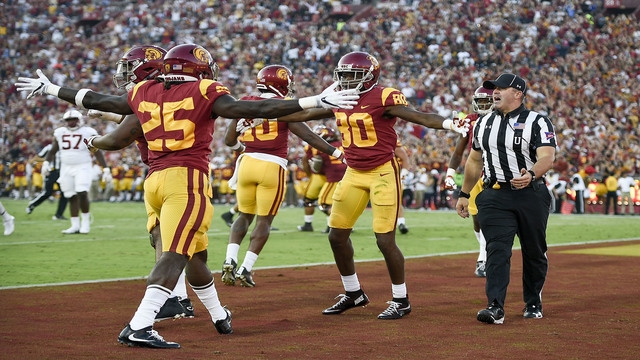 Another week, another set of college football rankings. And after all the craziness that ensued on Saturday, there was some shuffling at the top of the latest AP Poll.

Boomer. Sooner. Oklahoma rose to No. 2 in this week’s rankings behind a sparkling performance from senior quarterback Baker Mayfield, who threw for 386 yards and three touchdowns.

The Sooners just outclassed Ohio State, which fell to No. 8 after the home loss, on both sides of the ball. Buckeye receivers struggled to create separation. When they did, J.T. Barrett struggled to find them. But credit Oklahoma – Mayfield lost his three primary weapons: Samaje Perine, Joe Mixon and Dede Westbrook – to the NFL this season. Oh, and he lost his head coach to boot. Didn’t matter on Saturday. Mayfield did what he does – he scrambled, he avoided plays that should have been sacks, and he was accurate. Oklahoma is a legitimate College Football Playoff contender.

So is Clemson, which might have the best defense in the country – and yes, that includes Alabama. The No. 3 Tigers held Auburn to 117 yards of offense in a 14-6 victory. We knew the Clemson defense would be awesome – that’s what happens when you win a national championship and return most of your key difference-makers. Duh.

What we were unsure about was the offense – Clemson lost Deshaun Watson, Wayne Gallman and Mike Williams to the NFL. Kelly Bryant was solid, if unspectacular, in the biggest start of his college career, throwing for 181 yards and rushing for two touchdowns. The Clemson rushing attack was anemic, but give Auburn’s defense credit: it’s maybe only a notch below Clemson’s. In other words, they’re really, really good. We’re counting down the days to when Lamar Jackson, who went scorched earth on North Carolina Saturday, faces the Clemson defense this weekend.

The USC Trojans are back to where they started the season – fourth in the country – after an impressive home win against Stanford. Yeah, we can all stop panicking about the first three quarters of the Western Michigan game now. Sam Darnold completed 81 percent of his passes. Ronald Jones showed once again why he is, in fact, a dude; RoJo rushed for 116 yards and two touchdowns.

The offense looked good. So did the defense – through the air, anyway. But the USC front seven still leaves some cause for concern; Bryce Love averaged 9.4 yards per tote on Saturday. Thankfully for the Trojans, their secondary is otherworldly. But you’re not going to win a national championship allowing that kind of real estate on the ground. The good news: there’s plenty of time left in the season for tweaks.

A weird quirk in this week’s poll: Penn State beat Pittsburgh by 19 points… and dropped a spot in the rankings? Yep. But in this case, it makes sense. Oklahoma beat Ohio State. Clemson beat Auburn. USC beat Stanford. In a vacuum, taking care of business against the Panthers should have allowed the Nittany Lions to stand pat in the poll, at the very least – if not rise a spot or two. But when you look at the opponents the three teams above them just beat, you start to get it. Penn State is still very much a College Football Playoff threat; in fact, it could be the most likely Big Ten team to reach the festivities after Ohio State’s loss. It was just wrong place, wrong time for them this week.

Moving on down the rankings, a few things stick out: No. 25 UCLA joins the mix for the first time this season. You can never turn off a Bruins game – not with Josh Rosen under center. UCLA racked up 56 points this weekend behind their QB’s five touchdown passes; on the season, Rosen is already flirting with 1,000 passing yards. It’s been two games, folks. Polarizing, sure – but we can all agree that he’s darn good. If the Bruin defense can make strides, watch out for these guys.

It was a loud week at the top of the AP Poll, but there wasn’t much significant movement in the middle. Louisville rose three spots after Lamar Jackson…. happened. Yeah, we’ll go with ‘happened.’ Stanford dropped five spots to No. 19 – which might seem a bit harsh at first glance, considering the Cardinal lost to the then-No. 6 team on the road. But with Georgia, Virginia Tech, Miami (Fla.) and Kansas State piling up wins, their fall makes sense. Washington State might have played the craziest game of the weekend against Boise State, winning in three overtimes. And for all of that, it only rose one spot. Still – the perennially underrated Cougars will make noise in the Pac-12 this season. Keep and eye on Luke Falk and company.

The best is yet to come in the 2017 college football season. But two weeks in, it’s already been an awful lot of fun.