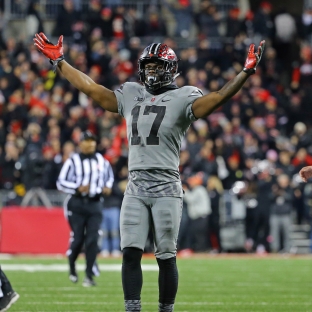 If there’s one thing this college football season has taught us, it’s that no game is safe for a College Football Playoff contender.

No. 3 Ohio State flipped the Big Ten race on its head, completing a massive comeback over then-No. 2 Penn State. The Buckeyes moved up three spots for their efforts behind more than 400 all-purpose yards for J.T. Barrett.

Huge win for Ohio State, but that had to feel awesome for Barrett, specifically. There’s been a lot of chatter that he’s not up to the task in big games. He flamed out against Clemson in last year’s Playoff. He struggled against Oklahoma earlier this season.

Barrett may not have silenced those doubters completely on Saturday, but he showed he’s perfectly capable of balling out on the biggest stage. Props to him and the resurgent Buckeye offense.

Penn State’s loss opened the door up for Georgia to slide up to the No. 2 spot, giving the SEC the top two teams in the rankings. The Bulldogs continue to look unbeatable. They dominated Florida from start to finish in Week 9. If Alabama and Georgia can stay undefeated until the SEC championship game, it will be one of the highly-touted conference title matchups ever.

The question: would the loser of that game still make the Playoff? Maybe, maybe not. Losses like TCU’s help the SEC’s cause. Iowa State, which checks in at No. 14, struck again on Saturday, upsetting the Horned Frogs in Ames. TCU was easily the Big 12’s best shot at a Playoff berth – with the Frogs’ loss, it doesn’t seem likely that the Big 12 will send a school to the festivities.

In order for two SEC teams (or Big Ten, for that matter, as we’ll get to) to make the Playoff, there needs to be a few conferences that don’t have a clear CFP contender. The Pac-12 is all over the place. So is the Big 12. That bodes well for teams like Alabama, Georgia, Wisconsin, Ohio State and Penn State.

Speaking of Wisconsin, the Badgers rose to No. 4 after handling their business against Illinois, giving the Big Ten the third and fourth spots in the rankings. If the Buckeyes and the Badgers run the table the rest of the way (again, big if, considering how this season has gone), they’d meet in the Big Ten championship game. The last time that happened, Wisconsin didn’t come within 50 points of Ohio State. It would likely take a Wisconsin win in a competitive game for both schools to punch CFP tickets, along with some other dominoes falling. But it’s not out of the picture. Once again, the Big Ten is stacked at the top.

MORE: Is any CFP contender safe?

No. 5 Notre Dame is lurking behind the SEC and Big Ten schools. The Fighting Irish stomped on North Carolina State on Saturday, with Josh Adams once again rumbling for more than 200 yards. Notre Dame has the best offensive line in the country with an impressive stable of running backs. Brandon Wimbush, the quarterback, has the wheels of a running back. The defense is solid. That’s a recipe for success, as we’ve seen. Notre Dame still has to go to No. 9 Miami (Fla.) this season. But if the Irish can pass that test, they’ll be in great shape. What a rebound year for Brian Kelly and company.

A few other things that stand out: outside of Alabama and Georgia, no SEC team is inside of the top 15. No. 16 Auburn is the next closest school to the top. LSU and Mississippi State are the league’s other ranked teams.

Miami continues to win, but the Hurricanes are doing so in rather unimpressive fashion, which is why they dropped one spot despite winning. North Carolina, which has struggled mightily this season, gave Miami all it could handle. That’s why the Hurricanes, despite being undefeated, sit behind one-loss teams like Oklahoma, Notre Dame, Penn State and Clemson. With that said, Miami will have a chance to earn a signature win when it plays host to the Fighting Irish.

A look around at all of the power conferences: the Pac-12 has five ranked schools, but No. 12 Washington is the highest. No. 7 Clemson, despite losing to Syracuse earlier, is still in prime position to make the Playoff. One of Alabama or Georgia is a near lock to make the CFP, if not both. Same with Ohio State and Wisconsin from the Big Ten. The Big 12 has the No. 10, 11 and 14 teams, but none look like true Playoff contenders.

This is different than what we’ve seen in the Playoff era, with independent Notre Dame waiting in the shadows and the SEC and Big Ten having a stranglehold over the top of the rankings.

It will be fascinating to see how this all plays out.