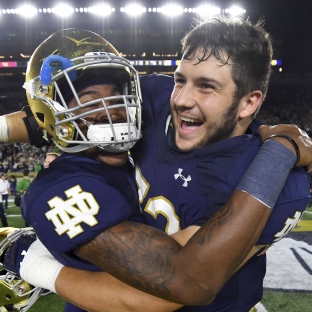 Another week, another set of college football rankings. And while this past Saturday wasn’t as crazy as the week prior, there’s still plenty to sink our teeth into.

As expected, No. 9 Notre Dame is the highest riser. The Fighting Irish have been fantastic all season, and they padded their resume in Week 8, pummeling archrival USC by 35.

Notre Dame is unstoppable on the ground. The Irish racked up 377 more rushing yards on Saturday, 191 of which came from star tailback Josh Adams. Notre Dame doesn’t do that every week – but eviscerating opponents at the line of scrimmage is the new normal for these guys. Its one loss came against Georgia, by one point. The Bulldogs look like a Playoff team.

ND still has three ranked opponents on its schedule, including two tough road games at No. 8 Miami and No. 20 Stanford. While that looks daunting, if you’re Notre Dame, you have to embrace it. Will the Irish win all three of those games? Certainly possible, but probably not. But if they do, the Irish could quite possible be Playoff-bound.

Make no mistake, this team is for real. Any kind win over a talented USC squad would have been nice. But to overwhelm the Trojans in every facet allows Fighting Irish fans to aim higher. USC fell to 21st in the rankings, as the Pac-12 continues its inconsistent ways. Before this game, the Trojans had real Playoff hopes if they ran the table. Those are all but squashed now. No. 12 Washington is the highest-ranked Pac-12 squad.

Penn State may not have moved up in this week’s rankings, but it certainly justified its No. 2 billing. It was never a fair fight between PSU and Michigan. Saquon Barkley balled, Trace McSorley played sidekick, and the Nittany Lion defense continued its run as one of the better units in the country.

Penn State won by 29 points. What’s most telling: Michigan fell out of the rankings completely. The Nittany Lions don’t play Wisconsin in the regular season, but a Big Ten championship game date could be in store. That would have major Playoff implications.

One new team joined the fray this week: No. 25 Iowa State. How great has Matt Campbell been in Ames? The Cyclones held high-flying Texas Tech to 13 points in a decisive home victory. Iowa State has a win over Oklahoma, too.

Once upon a time, Iowa State was a pseudo bye week for Big 12 foes. Now, the Cyclones are one of the reasons why that’s an incredibly deep conference. The Big 12 has five ranked teams: No. 4 TCU, No. 10 Oklahoma, No. 11 Oklahoma State, No. 22 West Virginia and No. 25 Iowa State. Texas in unranked, but competitive, as Oklahoma State knows. Kansas State almost beat Oklahoma yesterday. Heck – Baylor has had a bad season, but it nearly upset the Mountaineers. Easy weeks are rare in the Big 12.

As good as that league has been, if we’re talking about the College Football Playoff, the conversation revolves around the Big Ten and the SEC. The SEC has the first and third-ranked teams. The Big Ten has two, five and six.

If Alabama and Georgia both enter the SEC title game undefeated, it’s hard to see either being left out of the CFP festivities. If TCU wins out, the all-Big Ten vs. SEC Playoff talk is moot. But if the Horned Frogs falter – and some serious roadblocks await them – this is a real possibility.

Week 8 essentially went chalk. That’s what makes the Week 7s of the season all the more special.

Expect something between those two extremes for the rest of the season. It’s going to be a heck of a ride.