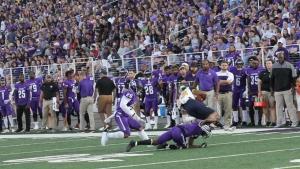 
A wild Week 7 saw five DII football top 25 teams lose their Saturday matchups. With only one coming against a ranked opponent, there was quite a bit of movement in this week’s DII AFCA rankings.

Before we get into the ramifications of the four Week 7 upsets, let’s take a look at this week’s DII football rankings:

Right now it’s hard to argue against any of the top four teams in DII football. Each one continues to prove week in and week out why they have had a stranglehold on the top 4 for the bulk of the 2019 season.

TRACK THE UNDEFEATED TEAMS: All 14 perfect teams, and who they have left

Tarleton State continues to build its impressive resume, making a strong case to be as high as the No. 2-ranked team in DII football. The Texans opened the season with an 11-point victory over FCS Stephen F. Austin, defeated then-No. 23 Angelo State 30-13 in Week 5, and then took down then-No. 20 Texas A&M-Commerce 35-21 this past weekend. Notice the common trend? The Texans aren’t simply beating good teams, they are winning big.

Speaking of winning big, that seems to be the only thing No. 1 Valdosta State does. Quarterback Rogan Wells had his most complete game of the season, totaling 421 yards and four touchdowns as the Blazers put up a season-high 55 points on Saturday. They are now outscoring their opponents 305-116 through seven weeks.

Minnesota State continues to roll through the NSIC, setting the program mark with 74 points this past weekend. The Mavericks have one of the best running backs in DII in Nate Gunn and one of the best wide receivers in Shane Zylstra. When you pair those two with a top tier defense, this team looks unbeatable.

And then there is the national runners-up Ferris State. The Bulldogs have fought through adversity and now look to be firing on all cylinders. I’ll go ahead and say it: over the last two weekends, these Bulldogs have looked better than last year’s team. Wide receiver (and punter) Sy Barnett is one of the most underrated players in DII football, so start paying more attention to him.

West Florida entered the top 25 two weeks ago and had to wait a week on bye to play its first game in 2019 as a ranked team. The Argos certainly delivered, beating West Georgia 30-2. In turn, West Florida made the biggest leap this week jumping four spots to No. 20.

There was a gaggle of teams that jumped three spots. Central Missouri continues its rapid climb up the poll, now right outside the top 10 at No. 11. Harding continues to roll with another impressive victory, leaping to No. 18. One week after nearly beating Slippery Rock, Indiana (Pa) jumped right back up the rankings from No. 22 to No. 19. And lastly, the roller coaster ride up and down the poll that Angelo State has been on the past four weeks continued. The Rams are now at No. 22, their highest ranking of the season.

Let’s not forget about the Colorado School of Mines. Although the Orediggers jumped just two spots, it was right into the top 10. While offense has always been the key for the Mines, this defense has pitched consecutive shutouts.

PREDICTIONS: 5 preseason predictions revisited at the halfway point of 2019

Obviously, with so many upsets, there were quite a few teams that fell this week. West Chester dropped the most, falling nine spots to No. 21. Northwest Missouri State dropped outside the top 10 for the first time in 2019, falling seven spots to No. 14. Texas A&M-Commerce dropped three spots after picking up its second loss of the season, both to top 25 teams. Pittsburg State and Minnesota Duluth dropped out of the top 25.

Let’s welcome Henderson State and Virginia Union to the poll. I predicted the Panthers were tournament-bound prior to the season, and now they enter the poll at No. 25. This week’s matchup with No. 15 Bowie State will tell how long that lasts. The Reddies have one of the more fun offenses in DII, and with a big showdown against Ouachita Baptist left at the end of the season. This team could be on the rise in the coming weeks.

With Virginia Union entering the poll, we get a top 25 showdown with big CIAA implications. The Panthers travel to Bowie State and a win would shift the tide in the conference.

Notre Dame (OH) should be in for a battle in a non-conference matchup with Findlay. The Oilers are 5-2 and have a potent rushing attack that’s tough to maintain. Of course, the Falcons know a thing or two about rushing the football, with Jaleel McLaughlin leading DII football in total rushing yards in 2019.

West Chester will have to find a way to bounce back against a 5-2 East Stroudsburg team. The problem for the Golden Rams is that the Warriors have lost those two games in consecutive weeks and will be looking to make a statement against a top 25 foe.

UIndy is back in action after a bye week and begins its first of three games against opponents with winning records. Missouri S&T is the first of the bunch, two games removed from a big Week 6 win over FCS Texas Southern.

Pittsburg State will look to get right back into the top 25 mix. The Gorillas have the chance to rebound quickly with a game against No. 11 Central Missouri. It will complete one of the toughest stretches any team has had to endure in 2019, going from Northwest Missouri State to Fort Hays State and now the red-hot Mules.

Take a look at the complete schedule for the top 25:

How the DII conferences fared in the top 25

The Great American Conference is on the move. With Henderson State joining the top 25 parties, the GAC now has three teams represented in the top 25 along with the Lone Star Conference. It is still a PSAC party, however, as the only conference with four teams in the mix.

Here’s a look at the top 25 by conference: