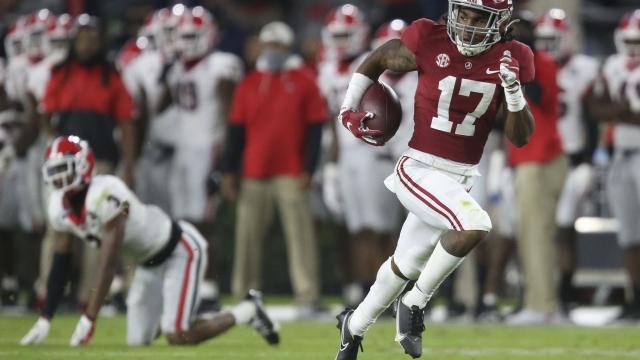 
Week 7 of the college football season provided fans with more clarity at the top of the sport and more turnover at the bottom of the AP Top 25 poll. The latest AP poll was released Sunday afternoon and it features a different team at No. 3 through No. 9 compared to last week, plus three new names in the 20s.

Here’s everything you need to know about the latest AP poll.

Week 7 of the college football season was bound to bring changes near the top of the AP poll with arguably the biggest game of the season to date: No. 2 Alabama vs. No. 3 Georgia. The Crimson Tide won going away, 41-24, but the Bulldogs fell just one spot to No. 4.

A result that college football fans may not have seen coming was unranked Florida State’s 31-28 win over No. 5 North Carolina, in which the Seminoles jumped out to a 24-0 lead in the first half. So the Tar Heels, too, fell in the AP poll for Week 8. They’re now at No. 14 – a nine-spot drop that was the biggest of any team in the Week 8 AP poll.

With Georgia and North Carolina both taking a tumble, albeit to different degrees, Notre Dame climbed to No. 3 and Ohio State, which will play its first game of the season on Saturday, Oct. 24, moved up to No. 5.

In this young 2020 college football season, Florida and North Carolina have climbed into the top five of the AP poll, only to fall soon thereafter.

But the top two teams solidified their standing

As has become standard during much of the College Football Playoff era, Clemson and Alabama are No. 1 and No. 2 in the sport — in some order. After a monstrous 73-7 win over Georgia Tech on Saturday, the Tigers held onto the No. 1 ranking despite the Crimson Tide also having an impressive win over then-No. 3 Georgia.

Clemson retained its Heisman Trophy-contending quarterback from last season, Trevor Lawrence (24-of-32, 404 yards, five touchdowns on Saturday), while Alabama’s new starter, Mac Jones, is playing like he could be in that conversation, too. Jones was also 24-of-32 passing, for 417 yards and four touchdowns against Georgia’s vaunted defense.

Clemson received 54 of a possible 62 first-place votes with Alabama receiving the rest. For reference, the gap between the number of votes No. 2 Alabama received and No. 3 Notre Dame (157 votes), is roughly the same gap that separates No. 7 Texas A&M and No. 11 Miami (FL) in the latest poll.

The Cougars are 5-0 after beating Houston 43-26 on Friday. On Sunday, they were rewarded with a two-spot improvement to No. 12 in the AP poll.

No. 1 Clemson, No. 16 SMU and fellow independent Liberty are the only other schools in the country that can claim a 5-0 record, and if schools continue to fail to hold onto their top-10 rankings, BYU could slowly but steadily climb in the poll. A road trip to Boise State in November is the game that will determine just how high the Cougars can soar in the poll. But as they’ve improved from unranked in the preseason to No. 12 in Week 8, BYU playing, and winning, football games has been one of the few consistent parts of the 2020 season.

The Big Ten is back

Is Ohio State the No. 5 team in the country? How close are the Nittany Lions to the Buckeyes?

Will Wisconsin or Minnesota challenge for the Big Ten Championship out of the Big Ten West?

Starting in Week 8, we’ll start to have answers to these questions at long last. The Big Ten officially kicks off its season on Friday, Oct. 23, when No. 14 Wisconsin hosts Illinois. The rest of the teams in the conference are scheduled to kick off their seasons the next day.

After Week 8, there will no longer be a (0-0) record next to the names of Ohio State, Penn State, Michigan and the rest of  the conference. A 1-0 record will begin to validate their rankings, and an 0-1 mark would change how AP poll voters perceived those Big Ten frontrunners entering the season.

Welcome to the club Marshall, NC State and Coastal Carolina

Three new teams joined the AP poll in Week 8: No. 22 Marshall, No. 23 NC State and No. 25 Coastal Carolina. It is Coastal Carolina’s first time being ranked since joining the FBS ranks in the 2017 season as the Chanticleers are 4-0 after winning a total of 13 games in their last three seasons.

The Thundering Herd is ranked for the first time since the 2014 season, behind Marshall’s 4-0 start in 2020.

What to watch in Week 8

College football fans will experience a good problem in Week 8, answering the question “What’s the best game of the week?”

No. 2 Alabama will visit now-unranked Tennessee, which fell from No. 18, as the Volunteers look to get right after a major defeat to Kentucky in Week 7.

No. 4 Georgia will try to rebound on the road against the aforementioned Wildcats.

No. 6 Oklahoma State will host No. 17 Iowa State in the Big 12’s only ranked-on-ranked matchup of the week.

Could No. 9 Cincinnati at No. 16 SMU have potential College Football Playoff implications?

No. 18 Michigan and No. 21 Minnesota will meet in the only ranked matchup in the Big Ten’s return.

Can Pitt, which has been known to topple some mighty opponents, pull off another massive win, this time at home against No. 3 Notre Dame? Can Indiana catch No. 8 Penn State in Bloomington?

Week 8 will mark the most games in a college football weekend so far this season, and there’s no shortage of compelling matchups to alternate between on your TV this Saturday.