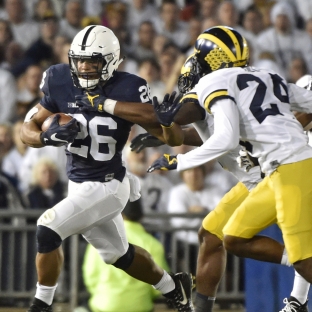 College football rankings: Did Penn State and Notre Dame tarnish their own victories?

Penn State was too good. The Nittany Lions ruined their best victory of the season.

One of the weird things about figuring out how to judge teams throughout a season is that being too dominant can sometimes work against a team. Penn State, for example.

The second-ranked Nittany Lions went into the Michigan game without a victory against a ranked team. The then-19th-ranked Wolverines represented, theoretically, Penn State’s toughest opponent of the season.

Then the Nittany Lions blew up Michigan, 42-13, knocking the Wolverines from the rankings and — poof! — that victory is no longer as impressive.

You all see what happened last night?

Sure you did, and we know it.

So it would have been better for Penn State if it played a closer game? Sort of a no-win situation. Time will tell just how tough an opponent is Michigan. No. 9 Notre Dame had a similar victory on Saturday, beating USC so badly that instead of it completely validating the Fighting Irish, it called into question the Trojans, who managed to hang on at No. 21 this week.

It is a moving target, but heat check would rather focus on the positive and talk about how well Penn State and Notre Dame played.

What did the voters think?

After a few weeks of giving Georgia the nod at No. 2, heat check is on board with Penn State behind Alabama. We’ll see if that’s the kiss of death.

The Bulldogs’ victory at Notre Dame is probably the most impressive win of the season right now — give or take Oklahoma’s victory at Ohio State. But the SEC East is dragging down Georgia’s resume.

Next: vs. Florida at Jacksonville, Florida.

The big test against Iowa State is definitely not something we saw coming. How long can the Horned Frogs stay above the Big 12 fray?

If Michigan doesn’t right itself, the Badgers could get to the Big Ten championship game having played no ranked opponents.

Welcome back to the season, Buckeyes. We have missed seeing you play interesting games.

The best one-loss team will have a chance to prove it the next couple weeks.

Next: vs. Georgia Tech.

“When you have adversity in your life it makes you focus and depend on the things that matter.” – Coach Swinney#ALLIN pic.twitter.com/H70YCqOswl

Three straight weeks of one-possession games for the Hurricanes.

Next: at North Carolina.

Heat check has been touting the Irish as underrated for a while — and they still are.

Baker Mayfield’s Heisman Trophy campaign seems to be a little stuck. He has been so good for so long that he might be taken for granted.

Next: vs. Texas Tech.

The Cowboys are doing their best to keep TCU, which handed Oklahoma State its only loss, looking good.

The Huskies’ cupcakes aren’t looking quite as soft with both Fresno State and Rutgers winning some games.

From North Carolina last week to Duke next, the Hokies are finishing up the basketball-school part of the schedule before a tough finish that includes three of four on the road.

A video 125 years in the making… For those who have passed, for those to come.

Beating Florida State and Louisville is losing some of its luster, but the next two weeks (Notre Dame and Clemson) will provide a definitive test.

If you find breaking rocks exciting, the Spartans should be your kind of team. No flash. Just grind.

According to the Sagarin Ratings, USF has played the 123rd toughest schedule in the country so far. Put another way, Houston at 4-3 will be the strongest opponent the Bulls have faced so far.

Navy was the first opponent to stay within two touchdowns of the Knights.

Next: vs. Austin Peay.

Tigers go into a bye gearing up for a stretch run that could push them into a major bowl or leave coach Gus Malzahn pondering his future.

Relive all of Auburn’s from a 52-20 victory over Arkansas in this week’s 60 Seconds of Glory.#WarEagle pic.twitter.com/oqD0q4AlNG

A prime-time game could help that Bryce Love Heisman campaign — even one against Oregon State.

Next: at Oregon State, Thursday.

The Trojans are still in position to win the Pac-12 South, but all of a sudden consecutive games against the Arizona schools makes for a tough couple weeks.

Next: at Arizona State.

Heat check: Too cold. At least ahead of Stanford, which USC beat.

The Tigers can get to eight wins this season without doing anything particularly special, but special isn’t required for a spot in the bottom of the Top 25.

As we are Callin’ Baton Rouge , check out the highlights from tonight’s 40-24 win against Ole Miss! #GeauxTigers pic.twitter.com/rDAQZjMF2z

The defense is bad, but Riley Ferguson, Anthony Miller and the offense certainly make Memphis one of the most fun teams in the country.

Next: vs. Tulane, Friday.

Ranked for the first time since 2005, the Cyclones are a play away against Iowa from being 6-1. This is no fluke.

Could argue for Mississippi State over LSU or Memphis, especially with the Bulldogs’ victory against the Tigers.

Share. Twitter Facebook Google+ Pinterest LinkedIn Tumblr Email
Previous ArticleCollege basketball: With the game on the line, who do you want taking the last shot?
Next Article Women's basketball preview: Will Baylor or Texas prove to be the best team in the Big 12?