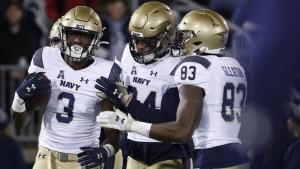 
The huge LSU vs. Alabama game will officially be a No. 1 vs. No. 2 matchup, according to Sunday’s new AP Poll.

The top-ranked Tigers lead an unchanged Top 5, but there are changes elsewhere. Georgia improved two spots to sixth; Memphis moved up five spots to No. 19. And Navy’s inclusion means there are now four ranked American Athletic Conference teams. Only the SEC and Big Ten have more.

Georgia is now up to No. 6, up two spots, taking the ranking previously held by the team it just beat: Florida. The Bulldogs are the highest-ranked one loss team, one spot ahead of Oregon. Florida is now the highest-ranked two-loss team at 10th.

Navy is in the AP Top 25 for the first time since 2017, when the Midshipmen were ranked at No. 25 for one week but lost to Memphis. Now Navy is ranked again and is one win away from the program’s first six-game winning streak in a season since 1979. Navy is off until traveling to Notre Dame on Nov. 16.

With the Midshipmen back in the polls, there are now four ranked AAC teams: No. 17 Cincinnati, No. 19 Memphis and No. 23 SMU are the others.

Though Florida lost by only a touchdown to rival Georgia, the Gators’ second loss this season pushed them down four spots to No. 10.

SMU was one of the final eight undefeated teams but then fell to then-No. 24 Memphis, 54-48. The Mustangs dropped eight spots to No. 23.

Appalachian State is the only team to fall out of the poll, as the then-No. 20 Mountaineers lost at home to Georgia Southern, 24-21, on Halloween. It’s the second consecutive season the Eagles upset a ranked Appalachian State team.

UNDEFEATED WATCH: What’s ahead for the remaining unbeaten teams

This Saturday, Nov. 9, there are multiple games between 8-0 teams. In the AP Poll era, there has never been a day with such matchups before.

The LSU-Alabama game is the first regular-season No. 1 vs. No. 2 game since 2011…when it was LSU against Alabama.