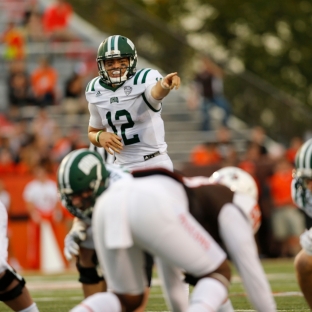 ATHENS, Ohio — As Nathan Rourke ran for a yard and his third score last week at Bowling Green late in the fourth quarter, it marked his 12th rushing touchdown of the season.

He was over the 100-yard mark for the third consecutive week. The 12th touchdown made him second in the nation in rushing touchdowns.

Rourke is the most potent rushing quarterback in head coach Frank solich’s time at Ohio.

To put it in perspective, a game after the halfway mark in the 2017 season, the true sophomore is two rushing touchdowns short of Kareem Wilson’s 14 from 1996, when he won the Mid-American Conference Offensive Player of the Year award.

And the stat that will awe even more: He passed Tyler Tettleton for the most rushing touchdowns by a Solich Bobcat quarterback at 10 last week.

“He is able to escape tough situations, keep the ball alive,” Solich said. “He can throw across his body if he has to, but he has excellent ability to make people miss, which is huge. He is like a running back in that manor. He can make the first guy miss and set up blocks, he has enough speed to be a factor in getting long runs. Some quarterbacks have it and some do not, and he does.”

Being the dual-threat player Rourke is, he’s able to diversify the offense. With a core of injured wide receivers, he has been making defenses focus on the running and passing game. And with an experienced running back behind him, A.J. Ouellette, more opponents are forced to focus on the read option.

At times last year, it seemed like the Bobcats offense would go through moments were points to hard to come by, such as Kent State and Akron, averaging 26.3 points per game. But this year, Ohio is averaging 39.0 points per game, best in the MAC.

That didn’t just happen overnight, but Rourke has played a large role in the change. It’s been especially helpful for Ohio because in certain games this season its defense has lapsed at times, and the Bobcats have responded by putting points on the board, such as the 58-50 win over UMass.

RELATED: Games to watch this week

Along with his national ranking in touchdowns, Rourke is third in the nation in total points with 72.

“I think his (Rourke) play warrants respect,” offensive coordinator Tim Albin said. “He had a few rough starts, but now he’s settled in. We have to take into consideration he’s only a sophomore and never played Division I football before.

“His makeup as a quarterback is what you’re after. He doesn’t panic. The thing that really helped us last week was the drive before the half was huge. Made a few big passes and in the second half the running game took over.”

Rourke has a dynamic set of skills, he led the Bobcats to a score before halftime against Bowling Green, a drive where he passed for 75 yards. Then in the second half, he rushed for 119 yards and two touchdowns.

Albin hasn’t worked with him on running, but quarterback coach Scott Isphording knew he had something special on his hands when he met him.

“He’s the first recruit that I ever met that showed up with a notebook,” Isphording recalled. “He came down to see me and he had a notebook. He was writing stuff down, had things he wanted to know about, all of it. I said ‘Alright, this is my kind of guy.'”

The way he goes about this success, it would be hard know he’s been so successful. Before the season started, he deleted all social media off his phone. He hasn’t Tweeted anything out since July 31st and until Monday he didn’t know he was second in the nation in rushing touchdowns.

Maybe a step further, he runs up the hill the video board sits on after practice, multiple times.  He purposely waits until all players and media leave the field. He doesn’t want attention, not any of it.

Ouellette has run hills with him a few times, he thinks he’s a little crazy to be running after a two-hour practice. But that’s how Rourke prepares for games, so he can get that second wind in the second half.

“He spends more time than the average person preparing for games,” Ouellette said. “It comes with his success and skill. I’ve run a few hills with him, I don’t know how he does it.”