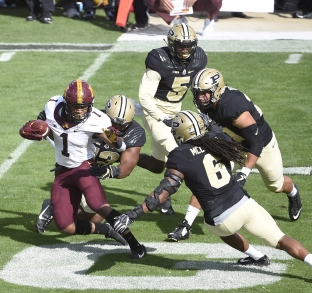 WEST LAFAYETTE, Ind. — For the Purdue defense, what a difference a year makes.

During a frustrating 3-9 season in 2016, the Boilermakers ranked 117th in scoring defense among 128 FBS teams, 114th in rushing defense, 89th in total defense and 31st in pass defense.

After limiting Minnesota to three second-half points in Saturday’s 31-17 victory, a confident Purdue defense heads to seventh-ranked Wisconsin (5-0, 2-0 Big Ten) this Saturday with a new-found swagger. The Boilermakers (3-2, 1-1) rank 36th in in scoring defense, 52nd in pass defense, 57th in total defense and 66th in rushing defense out of 130 teams at this point in the season.

In victories against Ohio, Missouri and Minnesota, the Purdue defense has allowed only 17 total second-half points.

“It’s a lot of factors,” Purdue coach Jeff Brohm explained on Monday. “I did like the defensive personnel when I got here. When I was able to work with them, I liked some of the parts. We had some experience and some guys who really looked the part and played the part in practice.

Before moving on to the Wisconsin game, Coach Brohm opened this week’s press conference with a word about the win over Minnesota. #BoilerUp pic.twitter.com/WRW9CtxmxL

“It really was about getting some of the guys who hadn’t played into the mix, seeing where they fit in and trying to build some depth so we can spell some guys and not make them play every rep. We have been able to do that pretty well. Our defensive coaches have done an outstanding job playing an attacking style of defense. We try to take away the run.”

Against Minnesota, Purdue rallied from a 14-6 deficit despite turning the ball over four times. Boilermaker running back D.J. Knox credits the defense for the victory.

“I love my defense,” Knox said. “We turned the ball over four times, and they saved us. So I just love my defense right now, because I have no doubt in my mind that when they step on that field, we’re going to get the ball back.”

Linebacker Danny Ezechukwu said there is a new attitude on defense at Purdue.

“I wouldn’t call it bend but don’t break,” Ezechukwu said. “I would call it we’re doing our assignment. We are a good defense, and we believe we can stop the run.”

Purdue will need an outstanding defensive effort to play the Badgers close.

“It was a great way to win the football game against Minnesota, and our guys hung in there to the end,” Brohm said. “We overcame a lot of adversity, which was great to see. It was great to see some of the faces of our seniors who have been here a while. You could tell it meant a whole lot to them. That makes coaching very rewarding. We now move on to a great opponent in Wisconsin.”

This article was written by Jeff Washburn from The Associated Press and was legally licensed through the NewsCred publisher network. Please direct all licensing questions to legal@newscred.com.