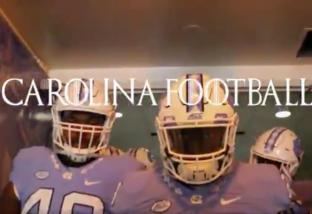 Winter is coming. And so is college football.

With Season 7 of Game of Thrones set to start up Sunday night, several college football programs have taken the opportunity to add a twist to their hype videos this preseason.

North Carolina was the latest to drop its Game of Thrones-themed rendition on Sunday, opting to utilize the television show’s classic theme song in the background. Meanwhile, Arizona and Ohio State were creative in setting their videos over the sound of characters’ voices in trailers. The latter two clips were released last Wednesday and in May, respectively.

Watch all three below:

Preparing for battle and ready to claim our spot on the throne.

Sunday’s season premiere of Game of Thrones starts at 9 p.m. ET on HBO. Fans will have to wait just a little bit longer for the start of the 2017 college football season, which kicks off Aug. 26.