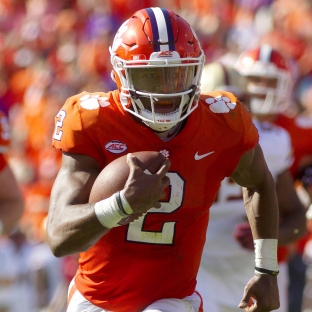 Week 4 wound up being sneaky entertaining. There are no Top 10 matchups to look forward to in Week 5, but it has the potential to shake up the College Football Playoff picture.

Here’s what you need to know about Friday and Saturday:

*Will USC be able to catch up to Wazzu if the Trojans start slowly? (USC at Washington State, Friday, 10:30 p.m. ET, ESPN)

USC has flirted with disaster all season. Its game against Western Michigan came down to the fourth quarter. The Trojans needed overtime to beat Texas. Cal hung with them for an uncomfortably long time.

Washington State is USC’s toughest test yet. Especially in Pullman, where the Cougars are incredibly tough. If Sam Darnold and company get off to a slow start on Friday night, as they’ve done all year, they may not be able to catch up. That’s because Luke Falk is commanding the opposing huddle. Falk doesn’t have the ability Darnold does, but he’s a more accomplished college quarterback.

Washington State has been stuck in the “good story, but not a Playoff contender” boat over the last few seasons. Think it’s ready to change the narrative?

USC has been shaky to this point despite its obvious potential. Washington is still very good, but perhaps not as good as last year. UCLA and Stanford have been worse than expected.

The Pac 12 is there for the taking. This game is massive for Washington State.

*Can John Kelly have a huge performance against a stout Georgia defense? (Georgia at Tennessee, 3:30 p.m. ET, CBS)

He’ll need to if Tennessee is going to hang in this one. The junior tailback is going to need to have a Florida-like performance, when he ran for 141 yards and hauled in six balls for 96 yards. Why? Because the Volunteers don’t have much else on offense. And the Georgia defense is scary.

Kelly accounted for 237 of Tennessee’s 442 yards against Florida. Similar story against Georgia Tech, when he scored four of the Vols’ six touchdowns. He’s a transcendent player.

But will that be enough to top a Georgia defense that just held Mississippi State to three points? Or Notre Dame to 19 in South Bend? The Bulldogs’ formula works. Pound it with Nick Chubb and Sony Michel, put Jake Fromm in comfortable situations and let the defense go to work. No need to get cute here.

Weird stuff always happens in this matchup. Tennessee beat Georgia last season, in Athens, on a walk-off Hail Mary. The Volunteers got a taste of their own medicine a few weeks ago against Florida.

Expect Tennessee to keep it close. But Georgia is too complete to pick against here.

Mississippi State was as bad on the road against Georgia as it was good against LSU at home. Who are the real Bulldogs?

They have another tough matchup this week. Auburn’s lone loss was at Clemson. Outside of that game, Auburn has outscored opponents 116-31. Jarrett Stidham is getting the hang of the offense after a rocky start, completing more than 80 percent of his passes in his last two outings.

Auburn hasn’t had an air threat like Stidham since Cam Newton. Granted, that speaks more to Auburn’s run-first mentality than Stidham, but the offense has more breathing room than usual. That’s crucial against Mississippi State, which was able to suffocate a ground-and-pound LSU offense but struggled against a diverse Georgia attack.

Based on what we’ve seen, home-field advantage is huge. Auburn can hang anywhere. Mississippi State can beat good teams, but we haven’t seen it away from Starkville. That’s the difference here.

This game doesn’t pop out on the schedule. Perhaps it should.

This year, the Red Raiders are typically themselves on offense, but they’ve been better on D. They won at Houston and scored only 27 points. In years past, scoring only 27 points would get Texas Tech beat. Badly.

So in Lubbock, against an Oklahoma State team that just laid an egg vs. TCU, does this have upset potential? Maybe. Granted, Texas Tech hasn’t faced an offense like the Cowboys’ yet. Despite the TCU loss, Mason Rudolph and James Washington remain one of the scariest tandems in the game.

But that Cowboy defense is a giant question mark. Texas Tech will score. It’s topped 50 in two of its three outings. A back-and-forth shootout is entirely possible. From there, who knows what can happen?

Other games have more CFP implications. But from a pure entertainment standpoint, this is a matchup to watch.

Jackson and the Hokies looked awesome in Week 1 against West Virginia, but they haven’t faced a team anywhere near Clemson’s caliber since then.

Meanwhile, Clemson has two of the most impressive wins of anyone, knocking off Auburn at home and Louisville on the road. Oh, and the Louisville win was emphatic. Reigning Heisman winner Lamar Jackson couldn’t solve the Tiger defense. If he can’t, who possibly can?

To his credit, Virginia Tech’s Jackson has passed every test. The freshman has 11 touchdown passes and one interception. He can move, too, which is critical against the fast and mean Clemson front seven. Jackson ran for 101 yards on 11 carries against West Virginia.

Virginia Tech is also at home, which is huge. It would be hard to envision the Hokies winning in Death Valley. But in Blacksburg, with “Enter Sandman” blaring and an inconsistent Clemson passing game coming to town, it’s possible.

That said, it’s still unlikely. If Louisville couldn’t puncture the Clemson defense at home, it’s hard to project any offense doing so.

Virginia Tech is solid all around. Justin Fuente has done a masterful job with the Hokies. But Clemson has the most trustworthy unit on the field. That gives the Tigers a slight edge, even on the road.