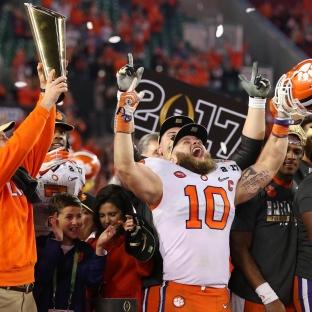 College Football Playoff: Which teams have been ranked the most in the playoff era?

We’re in the fourth year of the College Football Playoff, which represents almost an entire recruiting cycle – the true freshmen in the 2014 season are now seniors. It feels like a good time to evaluate which teams have been ranked the most often, and the highest on average, in the playoff era.

RELATED: College Football Playoff scenarios for each of the top 11 teams

Here are the schools that have the 10 highest totals for the number of weeks ranked in the College Football Playoff rankings. Alabama, Clemson and Ohio State – the three schools that have won a national championship in the CFP era – have appeared in every set of rankings since the first on Oct. 28, 2014.


Ranked the highest on average

Miami, of course, benefits from its undefeated start this season. The Hurricanes were never ranked in the past three years of the College Football Playoff, so their average ranking is based on only a three-week sample size.

Only seven schools have been ranked on selection day in each of the last three seasons. Four of the seven have made the College Football Playoff, with three of them making the playoff multiple times. The other three schools – USC, Utah and LSU – have been staples in the College Football Playoff rankings, but they have never finished better than ninth.

Here is the overall breakdown of each of the 58 schools that have been ranked in the top 25 by the College Football Playoff selection committee, along with their average ranking and their ranking on selection day during each of the last three seasons.