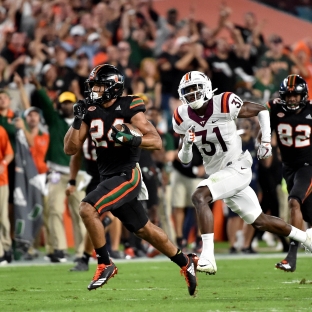 We’re one week closer to the College Football Playoff. And while the top four teams in last week’s rankings won, several squads who were lurking in the shadows made waves this week.

Some of them, for good reasons. Others, not so much. Here’s the full poll:


The top five teams from last week’s rankings remain untouched, but No. 5 Oklahoma likely helped itself down the road. If Georgia, Alabama, Notre Dame or Clemson loses, the Sooners have a stronger case to replace them than they did before beating Oklahoma State. OU fans may be disappointed their squad didn’t budge, but Baker Mayfield’s legendary performance could pay dividends later on.

The two most significant risers this week are No. 6 TCU and No. 7 Miami (Fla.). The Horned Frogs fell two weeks ago to Iowa State, but they rebounded nicely, beating Texas with ease on Saturday.

Of course, Oklahoma and TCU won’t stay in the No. 5 and 6 spots for long. They play each other this week. The loser will likely tumble outside of the top 10. The winner will… well, who knows? Georgia travels to No. 10 Auburn, while Alabama has to go face No. 16 Mississippi State in Starkville. No. 3 Notre Dame travels to No. 7 Miami (more on that soon).

That’s right: the top three teams all have to face ranked schools on the road this week, while the No. 5 team has a home game against the No. 6 team. Have plans on Saturday? Might want to rethink them.

Miami got the Wisconsin treatment last week, coming in at No. 10 despite having no losses. The Hurricanes jumped three spots after downing Virginia Tech, and they have a chance to make a serious leap this week if they beat Notre Dame. It’s funny how narratives can turn. In two weeks, it will be possible for Miami to have gone from an undefeated team with no impressive wins to firmly in the top four with consecutive wins over Virginia Tech and Notre Dame. You may find yourself repeating this sentence this week: that game between (insert teams here) is enormous.

A few other things to keep an eye on: while Wisconsin is still getting, well, we’ll just call it the Wisconsin treatment – Iowa’s win over Ohio State could help the Badgers in the short term. Wisconsin faces Iowa this week; the Hawkeyes are ranked 20th in the CFP poll. Finally, a win against a ranked team is within reach!

But in the end, Ohio State’s loss could actually wind up hurting Wisconsin, because the Buckeyes are tied with Michigan State for the Big Ten East lead. Ohio State and Michigan State play each other on Saturday. If the Buckeyes win, they’ll have sole possession of first place in the division. So it’s possible (even likely) that Ohio State and Wisconsin will meet in the Big Ten title game.

A Wisconsin conference championship would have looked a lot better if Ohio State was in the Playoff hunt. Stuff is going to happen that we can’t anticipate, but for now, Wisconsin is stuck in a Catch-22.

Right below Wisconsin is Washington, which still has a shot at the festivities. The Huskies may not control their own destiny, but based on the chaos we’ve already seen and the amount of ranked matchups taking place this week, they can’t be ruled out. Outside of the Arizona State loss, Washington ihas been crushing teams. Their lone loss looks more like the exception than the rule.

We’ll leave it here: sure, the top five may not have changed from last week to this one.

Looking ahead, It’s hard to see that happening again. This week will have a massive effect on the rest of the race. Saturday can’t arrive soon enough.

Share. Twitter Facebook Google+ Pinterest LinkedIn Tumblr Email
Previous ArticleHow big is the average college football player? Breaking down the size of different teams, positions, and conferences
Next Article The 8 remaining games that will most impact the College Football Playoff