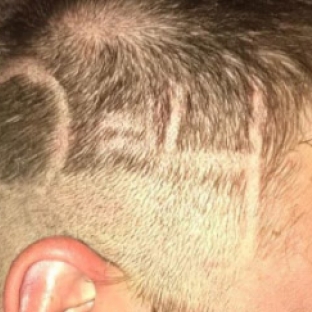 Denver Broncos tight ends Jeff Heuerman and Jake Butt are teammates and they play the same position, but that doesn’t mean they’re letting go of their colleges’ intense rivalry. That’s because Heuerman played at Ohio State, where he won a national championship, and Butt is a rookie who was drafted in the fifth round out of Michigan.

Being a rookie comes with certain, shall we say, initiation activities – carrying teammates’ gear to the locker room after practice, maybe sporting a princess backpack, or letting teammates give you a ridiculous haricut of their choosing.

Heuerman decided to make Butt, a “Michigan Man,” a walking billboard for the Buckeyes, shaving Ohio State’s block “O” in the back of Butt’s head, as well as “0-4” on the side of his head, representing Michigan’s record against Ohio State while Butt played in Ann Arbor.